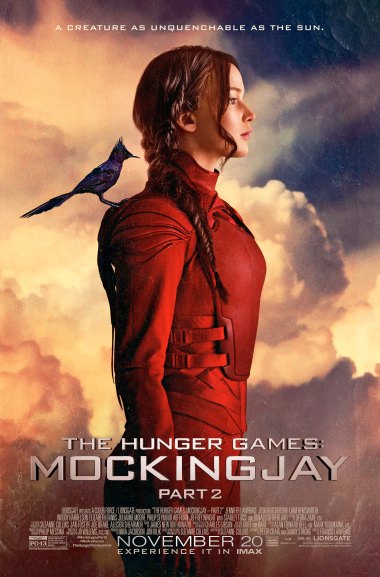 Let me stress this to film-goers and Hunger Games aficionados everywhere: this latest instalment, The Hunger Games: Mockingjay – Part 1, is a mixed bag. Following in the Harry Potter, Hobbit, and Twilight‘s footsteps, this first-half feature is purposefully messy. Ok, that’s unconfirmed. However, it sure seems tangible. The movie’s central action sequence solidifies this theory.Teenage warrior Katniss Everdeen (Jennifer Lawrence), eyes down an enemy bomber, takes a deep breath, and fires her bow. Despite the awesomeness, it’s the one time she uses her signature weapon here.

Setting everything up for Part 2 (coming mid to late 2015), Mockingjay – Part 1 constructs an obstacle course for itself. Spinning several plates at once, the story wobbles violently before its rescue. Part of another undeserving and needless trend, this instalment should have only been one 150-minute feature. However, to make an extra billion in box-office revenue, Lionsgate screwed the pooch. The story, such as it is, hurls us back into the desolate landscapes of Panem. Thankfully, this entry takes a wholly refreshing departure from the Games. Katniss, having survived the world-shattering events of Catching Fire, is on rebellion leader President Alma Coin (Julianne Moore) and Plutarch Heavensbee(Philip Seymour Hoffman)’s watch. Applauded by Districts 1 through 12, she’s become the symbol of rebellion and hope. Previously unaware of District 13’s existence, she learns of several mind-numbing truths. Pulled into the resistance/Capitol war, her efforts spark significant unrest. Worried about friend/admirer Peeta(Josh Hutcherson)’s safety, she focuses on protecting her loved ones. Despite volunteer soldier Gale(Liam Hemsworth)’s long-lasting affections, Katniss’ resolve reaches breaking point. Armed by previous Games winner Beetee (Jeffrey Wright), Katniss and Gale become the children of the revolution.

Similarly to Deathly Hallows and Breaking Dawn, Mockingjay already suffers from studio interference. Almost always, splitting one narrative into two causes major structural flaws. In no other instance would this tactic be acceptable. So, why does this multi-billion dollar industry do it? Beyond the monetary gain, mass fandom influences these decisions. The fans, infatuated with Suzanne Collins’ original material and/or these adaptations, form a tight-knit community. Predictably, despite the cast and crew’s efforts, this installment doesn’t work by itself. It’s wafer thin narrative yields overwhelming major and minor flaws. The first half, specifically the painfully dour first act, explores our distraught lead’s psyche. Aided by former Hunger Games victor Finnick O’Dair (Sam Claflin), she flips between rousing anger and teary-eyed remorse. The movie unevenly plonks certain sequences next to one another. Though emphasising the consequences and stakes, it’s repetitiveness and bloated narrative are repulsive. The story leaves little but charred corpses, random set-pieces, and heavy-handed rants to connect with. The Capitol, however, still comes off like the Empire. The tension builds whenever moustache-twirler President Snow (Donald Sutherland) and Caesar Flickerman (Stanley Tucci) appear. Sadly, this instalment takes the arrow away from the bow. Katniss, by focusing entirely on Peeta and Gale instead of the world around her, becomes yet another love-struck Young Adult heroine. Slipping from Catching Fire‘s grit to Divergent‘s distasteful pandering, this instalment never establishes its love triangle. Katniss, the only well-developed and charismatic character of the three, almost becomes Bella Swan here (but could still kick her ass!).

“You will rescue Peeta at the earliest opportunity, or you will find another Mockingjay.” (Katniss Everdeen (Jennifer Lawrence), The Hunger Games: Mockingjay – Part 1).

The major problems with Mockingjay – Part 1 have little to do with its actors, screenwriters, or director. Similarly to the Capitol, Lionsgate’s overbearing gaze affects everything involved. The infamous split-in-two decision sucks this instalment dry. Katniss doesn’t help either: becoming a shrill, unfavourable, and indignant YA trope. Fighting only for herself, her barely defined family members, and two bland super-zeroes, the Girl on Fire is now extinguishing her own flames. Sadly, the Mockingjay is struggling to take flight. Let’s hope Part 2 drops the attitude and picks up the bow.

Verdict: Half a Hunger Games flick (for better or worse).

Verdict: An engaging, moody, and impactful sequel for the holidays.

The first of this enormously successful trilogy of young adult novels by Suzanne Collins, The Hunger Games, has finally been translated to the big screen. With the notoriety this book has received and the difficulty of projecting this harsh story to large audiences, you have to wonder how they could possibly do a competent job. Thankfully they have; creating a beautiful yet sombre perspective of a reality show contestant in the most dangerous competition ever imagined.

The Hunger Games starts out in the realm of District 12, one of 12 districts working their fingers to the bone to satisfy the needs of the futuristic landscape known as ‘The Capitol’. With the 12 districts given the appearance of coal mining towns in the 1800s, its inhabitants work hard and follow the oppressive rules to survive. Teenage wanderer Katniss Everdeen (Jennifer Lawrence) envisions a life away from restraints. Her protective nature over her sister Primrose is brought to light when Prim is chosen to be in the capitol’s favourite annual event, the Hunger Games, in which 24 citizens, two from each district, between the ages of 12 and 18 are chosen to forcefully participate in a bloodbath. 24 go in, one comes out. After volunteering for the event to save her sister, Katniss is accompanied by Peeta (Josh Hutcherson). They must both physically and mentally challenge themselves in and out of the arena as their moral judgements, both for humanity and social indifference, will be greatly tested.

Someone who hasn’t read the books (myself Included) may see this for what it is; a bloodthirsty battle for survival featuring the teenage fantasy of good looking characters and romance in the face of danger, with an aim of pleasing the entire family. The translation of this book, while a hard one to pull off, brings elements from different genres and visual styles together in a charming fashion. The witty dialogue and chemistry between the characters is a unique and enlightening trait, sadly missing from similar adaptations such as Percy Jackson or The Golden Compass. Director Gary Ross (Pleasantville, Seabiscuit) creates a rightfully sombre depiction of events while being able to inject an appropriate amount of charisma. His direction in the slow, dialogue based parts is powerful. Poignant yet romantic technicolour dreams of The Capitol and moral ambiguity in the face of death is the perfect balance found right off the bat. The visual style delicately reflects Katniss’s strong emotional shifts. District 12 is reflected as a decrepit and colourless land surrounded by green forests, simulating her desperate desire to leave the borders of this lower class society. While The Capitol is certainly a sight to behold. A powerful and fixating mixture of Tokyo anime and New York fashion week depicts the technicolour plethora of futuristic yet concrete grey city settings and elaborate characters decked out in outrageous costumes and hairstyles. The performances also add to the charm needed for this depressing story.

“May the odds be ever in your favour.” (Katniss Everdeen (Jennifer Lawrence), The Hunger Games).

An impressive supporting cast including Woody Harrelson, Elizabeth Banks, Wes Bentley, Stanley Tucci and Donald Sutherland deliver fun yet nuanced performances. While singer Lenny Kravitz is a revelation as Cinna, a stylist making the best of a bad situation for the participants. This is not a perfect film however as some of the more confronting themes and directions the book is known for are sadly lost in the translation. The film’s overall problem matches a similar problem with the Harry Potter films, in that it feels like there are so many elements brought in from the novel that the film loses focus and leaves behind any sense of emotional impact or connection. Jennifer Lawrence, Hutcherson and Hemsworth deliver dynamic performances, but the love triangle between them, when eventually touched on, feels forced. While the supporting characters fail to deliver a dramatic affect on any level and are strangely left out of most of the second half. Another major flaw is the game itself. The direction is uninspiring as Ross fails to deliver the technical ingenuity needed to tell this interpretation of kids being tested in brutal combat. Despite its shocking violence at certain times; quick cuts, uncomfortably close shot framing and an irritating shaky camera style unfortunately turn what should be affecting scenes of death into completely incomprehensible fist fights and blood splatters.

The Hunger Games, if anything, points directly at our love of big-budget entertainment. Revelling the hypocrisy, the movie utilises its impressive cast, solid writing team, and efficient director to bolster the YA genre. This adaptation is certainly worth fighting for!

Verdict: A flawed yet engaging action-drama.