Since Hollywood’s awe-inspiring beginnings, studios and filmmakers have thrown good guys and bad guys at eager audiences. In addition, some filmmakers have gone one step further to divert us from reality. With film technology evolving exponentially over the past 50 years, several major disaster epics have delivered monsters, weather patterns, and meteors for their characters to dodge and destroy. Recently, the tornado has become the go-to threat for Hollywood moguls to take down.

Tornadoes, in the cinematic sense, violently pull us in. As 1996’s Twister proved overwhelmingly, natural disasters can be spiced up with energetic action-direction, emotional resonance and plucky comic reliefs. Unsurprisingly, Hollywood’s latest disaster epic, Into the Storm, tries desperately to be the iconic Jan De Bont-helmed thrill-ride. Sadly, this epic gets picked up, thrown around, and dropped violently without warning. This movie, despite the pure optimism, never grasps onto anything of substance. On one side of Silverton, Oklahoma, we have high school vice principal Gary Morris (Richard Armitage) and his family. The story picks up with Gary struggling to connect with his two sons, Donnie (Max Deacon) and Trey (Nathan Kress). Failing to cope with his wife/their mother’s death, Gary sincerely asks them to record messages and graduation day services for the school’s time capsule. Donnie then volunteers to help his crush, Kaitlyn (Alycia Debnam-Carey), with a make-or-break project across town. At the same time, a band of storm chasers, led by Pete (Matt Walsh), discover a vicious tornado outbreak heading for the area. The team – rounded out by Allison (Sarah Wayne Callies), Daryl (Arlen Escarpeta), and Jacob (Jerry Sumpter) – is bolstered by a tank-like vehicle called ‘Titus’ designed to resist the tornado’s eye. 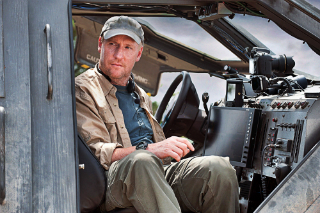 Along the way, we meet two redneck YouTube sensations, Donk (Kyle Davis) and Reevis (Jon Reep), vying for a whirlwind adventure. Into the Storm is a bizarre and interminable two-hour distraction. Inexplicably, the movie sets out to reach wildly contrasting demographics including Deadliest Catch/Ice Road Truckers addicts, found footage fans, disaster flick aficionados, climatologists, and horror-obsessed teenagers hungry for Friday night thrills. In doing so, this arrogant effort wholly fails to please anyone. Jumping erratically between scenes, the movie’s gears awkwardly turn as it reaches for different age groups. From the prologue onwards, where four hormonal teenagers are ‘ambushed’ by a whirling vortex of doom, the movie establishes its ultra-dumb horror vibe. Indeed, the movie’s intelligence levels cater specifically to popcorn-hungry, half-drunk adolescents. However, despite the zany marketing ploys, this thriller can’t even sustain itself for 90 minutes. Stretching its predictable sub-plots and character arcs around the action sequences, its narrative is about as exhilarating and intensifying as a light Autumn breeze. In fact, this thunderous creation picks up several cliches, contrivances, and corny moments throughout its monstrous assault. Copying and pasting plot-points and archetypes from Cloverfield, The Day After Tomorrow, and Dante’s Peak, Into the Storm is an unholy concoction of some of Hollywood’s biggest money makers.

“Grab a broom. It’s like a zombie apocalypse out here.” (Reevis (Jon Reep), Into the Storm).

A big-time filmmaker like Michael Bay or Roland Emmerich would’ve injected some much-needed humour and vigour into this banal effort. Sadly, director Steven Quale(Final Destination 5)’s latest wants to have its cake and eat it too. The movie relishes in the CGI-heavy creations and wanton destruction plastered across multiple frames. However, it also wants its audience to feel for the survivors. Unfortunately, its characters are troublesome hindrances. These unlikable/underdeveloped/idiotic people – though bolstered by trained thespians like Armitage and Wayne Callies – aren’t worth worrying about. Cranking the cheese factor up to 11 in the second half, the movie awkwardly throws a Right Wing message into its last few minutes. Presented like a Fox News piece, these artificial interludes hamper this already intolerable final product. Despite the problems, this disaster epic boasts engaging CGI-laden creations and set pieces. The  sentient tornadoes, speeding up whilst hurtling towards the screen, deliver several effective jump scares. At one point, a fire-hungry tornado barbecues one of our unlucky leads. However, the movie’s impressive effects are hindered by several editing and cinematography choices. At points, it’s difficult pointing out who’s holding a camera or why they are pointing it at these major threats. In addition, several wide shots distort the found footage conceit.

Bizarrely, Into the Storm‘s overwhelming stench of desperation provides an interest factor worth clinging onto. In striving for a larger audience, this disaster epic’s exorbitant reach exceeds its grasp. Hampered by useless characters and tried-and-true story-lines, the movie doesn’t even capture Twister‘s concentrated glow. However, the visual effects crew deserves credit for bolstering this tedious exercise in studio-driven filmmaking. I dare say the tornadoes are far more intelligent than the director, writer, and actors combined.

Video Games and Movies
J-Dubs Grin and Bear Its is