Any movie placing the word ‘wild’ in its title – no matter how big, small, good, or bad – is taking a major risk before release. Tackling one of cinema’s most popular adjectives, this word is a cliche not worth tripping over. Though fulfilled heartily in The Wild Bunch and The Wild One, movies like Wild Hogs, Wild, Wild West, and The Wild highlight this trope’s overt simplicity. Oscar-hungry drama Wild, grappling wholeheartedly with the cliche, appears wholly obvious and generic. 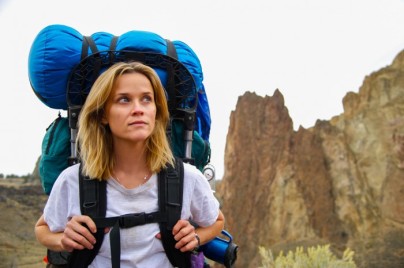 Despite the title’s simplicity, there’s a saying everyone should cling onto before seeing Wild: you can’t judge a book by its cover. In fact, the movie’s poster is surprisingly simple. Presenting its lead character, the American wilderness, and neat stylistic choices, the poster promises everything audiences expect nowadays from small-budget performance pieces. Fortunately, despite its many flaws, this walkabout is worth taking. Just make sure to see it with an open mind and a box of tissues. Wild delivers a story drenched in heart, heartache, and heartbreak. Our poster-hogging character is thirty/forty-something traveller Cheryl Strayed (Reese Witherspoon). After a string of poor choices, disappointing outcomes, and failed reboots, Strayed decides to venture down a well-known, well-worn path. Walking the United States’ notorious, over-1000-mile Pacific Crest Trail, from the US-Mexico border in California to the US-Canada border in Washington State, Strayed fashions her three-month trip as the ultimate jumpstart. Having divorced nice-guy husband Paul (Thomas Sadoski), Strayed reflects upon her adulterous indiscretions and addiction problems. Along the way, we see – via flashback – Strayed interacting with optimistic mother Bobbi (Laura Dern) and snarky brother Leif (Keene McRae). 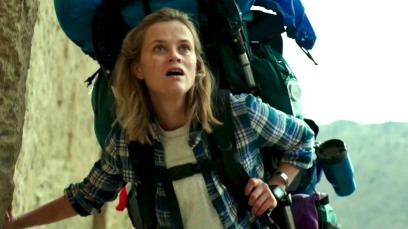 On her tumultuous trip through America’s unrelenting mid-section, Strayed meets several bright and enthusiastic characters serving as significant bursts of energy. In recent cinema history, survival-thrillers/road-trip flicks have relied on roller-coaster-like pacing, visceral gore, blockbuster storytelling tropes, and CGI-driven worlds. Dodging Life of Pi‘s visual stimulus, Tracks‘ sweeping scope, and Cast Away‘s volleyball/Angry Tom Hanks sequences, Wild carries is tried-and-true formula across the windy, dangerous path less taken. Shifting gracefully between major plot-points and interactions, director Jean-Marc Vallee (Dallas Buyers Club) bolsters this ombre tale with a real-world approach. Similarly to The Way, the movie’s grounded narrative analyses one of history’s most sumptuous activities. Despite Hollywood and the general public’s lack of interest in the PCT, this drama – based on Strayed’s real-life memoir Wild: From Lost to Found on the Pacific Crest Trail – makes a compelling argument for travelling, spiritual guidance, and self-worth. Across the vast stretch of land, the movie falls for Strayed’s gripping adventure. learning whilst doing, our hero seeks human interaction, core strength, and re-birth. Finally, another well-intentioned female character! Proving the journey is more valuable than the destination, the story, revolving around her intensifying character arc, is worthwhile. Despite this, the heavy-handed symbolism – outlined by Strayed’s run-ins with a poorly-rendered creature – adds little to the story or message.

“I’m lonelier in my real life than I am out here.” (Cheryl Strayed (Reese Witherspoon), Wild).

Infatuated with the Western world’s untouched landscapes, the European  filmmaker fuses its gut-wrenching story with a thought-provoking agenda and sterling comedic jaunts. Like with his preceding effort, his style draws life from generic plot-points  and characters. Trudging the arduous dirt path, as the movie switches from lively road-trip flick to dour relationship-drama/character study, Vallee, Witherspoon, and screenwriter Nick Hornby hold our interest throughout the 115-minute run-time. In the first scene, we get an uncompromising glimpse into Strayed’s cruel world. Strayed, stranded on top of a rocky hillside in an undisclosed location, pulls off her sock, rips off an infected toenail, before watching one of her boots tumble down a steep hillside. From there, Vallee and Witherspoon’s project pins us down and never lets go. Obviously, credit belongs to Witherspoon for shredding her starry persona. Grappling with a reprehensible character, the A-lister attacks each scene with award-worthy bravado. Despite its overwhelming positives, its story-telling and technical flourishes distort the narrative. Giving its supporting players little screen-time, the movie’s cold, lifeless flashbacks paint broad strokes. In addition, its pro-feminism message renders many the male characters mute and/or abrasive. However, it difficult to avoid the movie’s crisp, unrelenting locations. Yves Belanger’s wondrous cinematography – along with the immense scenic vistas – develop a momentous sensory assault.

Honouring its succinct title, Wild tells a haunting and visceral tale of man, nature, and existence. Valle, following up his 2013 Oscar contender, moulds an impactful and wondrous drama out of this profound true story. Aided by Witherspoon’s heart-breaking performance, the movie’s comedic moments and emotional resonance overshadow the minor flaws. Like our lead’s topsy-turvy career, the movie surges fourth despite the odds.

Today, the first world looks to Hollywood for inspiration. Despite being an easy target, film and TV industries deliver symbols and heroic figures. Thanks to grand illusions, we forget that celebrities are people too. These awe-inspiring figures aren’t simply high profile people collecting giant paycheques while posing for photographs. It’d be easy for celebrities – bombarded with blissful opportunities, temptations, and fan-bases – to make simplistic choices. The late 1990s and early 00s housed laughing stock turned celebrated actor Matthew McConaughey’s extraordinary ascension. Falling into the leading man slot, he picked roles based on giant paycheques and mass marketing campaigns. However, he’s recently proven his worth within the ever-shrinking A-list club.

Fortunately, McConaughey’s slew of award-worthy movies – forming the aptly titled ‘McConaissance’ – has bolstered his once-declining filmography. With his star shining brighter then ever, low-key docudrama Dallas Buyers Club hurls this dynamic actor into serious Oscar contention. However, despite the praise, one mind-boggling performance doesn’t make for a wholly compelling docudrama. Continuing this Oscar season’s trend of fusing darkly eclectic docudramas with powerful performance pieces, the movie relies entirely on the courage of its convictions. The movie chronicles rebellious loner turned dilapidated pharmaceutical figure Ron Woodroof. We meet Woodroof during awkward yet eye-catching circumstances. Woodroof, a serial womaniser and irritable misanthrope, leads a repetitive and tiresome existence. Gambling over rodeo bull rides and card games, his insatiable lifestyle reaches critical and disastrous conditions. With his ‘enviable’ lifestyle delivering countless surprises, his identity shifts violently after an industrial accident. At his local hospital, he is diagnosed with HIV/AIDS. Taken aback by his condition, his existence is turned upside down. With his friends’ prejudices pushing him away, Woodroof finds solace through drugs and alcohol. At this point, the movie becomes a familiar yet likeable drama aching for attention. Beyond McConaughey’s physical, mental, and emotional transformations (losing 18kg for the role), the movie’s sterling attention to detail and spiritual weight launches it into overdrive.

My praise for this significant actor can’t be undone. Over the past three years, McConaughey – gracefully embodying ruthless yet sympathetic criminals (Mud), middle-aged strippers (Magic Mike), honourable and vicious hitmen (Killer Joe), and straight-laced professionals (Bernie, The Paperboy, The Lincoln Lawyer) – has become Hollywood’s most dexterous actor. Graciously, the Texan artist saved his best performance for this potent and Oscar-worthy docudrama. Though not quite reaching The Wolf of Wall Street and Killer Joe‘s standards, Dallas Buyers Club delivers heartwarming and confronting qualities. Based on this extraordinary true story, the movie blissfully and honourably explores American history’s most taboo subject. The AIDS epidemic, explored in major releases like Philadelphia, hits like an impactful gut-punch. Despite informative and controversial subject matter, the movie never asks for sympathy. Unlike similar medical dramas, the movie never looks down upon its morally driven characters. In fact, for the most part, the movie refuses to sit patiently in a hospital waiting room. Emphatically immersing us in Woodroof’s journey, this Erin Brockovich-like docudrama becomes a love letter to Middle America’s unique inhabitants. Thankfully, Woodroof and his enlightening journey are insatiably empathetic. Despite his brash personality, this character arc becomes a tangible and exhilarating thrill-ride. Driving through an entrancing time period, this movie’s 20-year production history, coming from a loving place, touches on this and last century’s most debilitating issues. Despite its obvious flaws, the movie’s immaculate relevance pushes it into Oscar territory. The story’s parallels chart Woodroof’s shocking transformations. In comparing Woodroof’s pre and post diagnosis lifestyles, the movie’s cliches stick out. In the first few scenes, Woodroof is the pinnacle of manliness. Snorting cocaine, throwing around dollar bills, and setting up saucy threesomes, certain traits telegraph Woodroof’s overt transformation. Pushing him into the country’s gay, lesbian, and transgender community, this homophobic and anger-fuelled man’s journey is eye-rollingly overt. 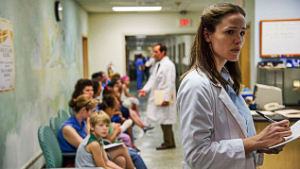 Dallas Buyers Club, despite its niggling flaws, is an enjoyably manic docudrama. Thanks to his scintillating transformation, McConaughey shows that big-name actors aren’t just in it for the thrills. He, despite his peculiar reputation, is systematically changing the game. Like Woodroof’s work, McConaughey’s process expands our ever-growing universe. Along with Leto and Garner elevating mediocre characterisations, the movie’s intelligent messages, acute sense of humour, and shocking twists elevate it above Oscar-bait territory.