Hollywood, over the past few years, has waged war against optimism, relationships and marriage. In seeking to connect with modern/cynical audiences, big-budget cinema seemingly exists to criticize these well-intentioned, life-altering decisions. According to Tinseltown, life post-proposal is nothing but broken promises and empty souls longing for the “till death do us part” scenario to become reality. Following up Gone Girl and Men, Women & Children, White Bird in a Blizzard strives to put the final nail in the coffin. 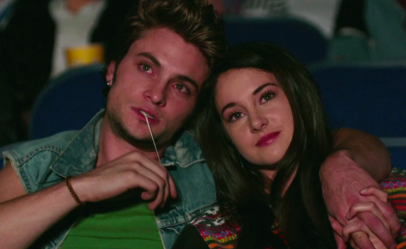 In all honesty, despite seeing the positives of marriage, this socially recognised union is not my thing. In fact, White Bird in a Blizzard could spark many wide-ranging viewpoints about marriage, adolescence, and life. The movie, though intent on forming its own analysis, longs for multiple discussions about its story, themes, and characters. Writer/director Gregg Araki (Doom Generation, Mysterious Skin) has studied, and adapted to, this film/film-goer interaction throughout his career. So, does his latest feature stand up to criticism? As it turns out, White Bird in a Blizzard fits comfortably into his controversial filmography. The movie crafts itself around 1980s suburban America’s pros and cons. Its story follows promiscuous high school graduate Kat Connor (Shailene Woodley). Preparing herself for a degree at Berkeley, the youngster – despite her loving family and friends’ support – feels cut off from the rest of the world. Aided by her confident father Brock (Christopher Meloni) and detestable mother Eve (Eva Green), Kat’s life resembles that of your average adolescent. However, after Eve’s mysterious disappearance, Kat must pull herself back from the brink whilst asking the most important question of all: What happened to mum?

Based on Laura Kasischke’s best-selling novel, White Bird in a Blizzard takes on several genres and messages within its hurried 91-minute run-time. Exploring out-there stories and characters, Araki’s on-set intentions and off-set demeanour define him as one of American cinema’s most unusual auteur filmmakers. Known for his New Queer Cinema movement entries, he – similarly to Gus Van Sant – isn’t afraid of proclaiming his sexual orientation and significant viewpoints. Faced with fearsome opposition, his movies seek to destroy prejudice, conflict, and status quo. His latest effort, discussing societal norms and the studio system, has a helluva lot on its mind. In fact, like previous features, White Bird in a Blizzard depicts horrific events with subtlety, verve, and intelligence. Sticking to Araki’s independent roots, the narrative wears the veil of American Beauty whilst hiding many masochistic undertones. Harking back to Sam Mendes and Todd Solondz’ earlier works, this drama-thriller depicts a love-is-a-lie version of middle-class existence. Tearing his story-threads and characters apart, each sickening twist and turn further enlarge the central conflict’s cracks, tears, and erosion. Kat, pointing out her family and friend’s overt pretentiousness and transparency, becomes the knife slicing through society’s grand illusions. Our existentially frazzled lead, despite her boyfriend/neighbour Phil(Shiloh Fernandez)’s nice-guy nature, seeks primarily to destroy his booming reputation. Several scenes – featuring fluffy conversations between her and friends Beth (Gabourey Sidibe) and Mickey (Mike Indelicato) – strive to elevate our ‘protagonist’ above everyone else.

“The beautiful woman she once was…became a phantom wandering away in a snowstorm.” (Kat Connor (Shailene Woodley), White Bird in a Blizzard).

Araki, not one for subtlety or objectivity, designed White Bird in a Blizzard to obliterate suburbia. Despite the approachable set-up, the movie thrusts deep-seeded emotions into the spotlight. Commenting on our evolution from 20th-century patio culture to 21st-century liberalism, the narrative revels in its views on feminism, masculinity, class warfare, gender politics, and relationships. Through flashbacks and dream sequences, we see a nightmarish insight into the Connor household. Eve, close to grinding glass into Brock’s dinner, appears stuck in a mind-numbing and lifeless void. Slipping into a booze-and-loose-clothes-addled depression, she leaps from glorified mistress to independent nightmare. Turning the tide throughout, the movie further examines its own disturbed, philosophical recesses. Biting off more than it can chew, it even tackles current young-adult, mystery-thriller, and relationship-drama trends. Crafting a Lovely Bones-esque switch from marriage to mystery, the narrative pokes fun at its whodunnit twists and turns. Whilst seducing Detective Scieziesciez (Thomas Jane), Kat openly calls her actions into question. Picking apart modern literature heroines’ weaknesses, it’s really an indictment against popular entertainment. She even has two good-looking guys fighting over her, outlined by her roommate’s “I’m Team Oliver” comments. In particular, Woodley’s casting illuminates Divergent and The Fault in Our Stars‘ misgivings. However, her sweet-natured performance, out-classing Meloni and co., highlights her immense dramatic talents.

Though Araki’s reach exceeds his grasp, his ambition and style cannot be faulted. Throwing bright colours, comically appealing narration, a kitsch soundtrack, and soap-opera-esque lines across his 11th feature, the writer/director Araki is one of few big-names crafting efforts of lasting effect and whip-smart attitude. White Bird in a Blizzard – thanks to its non-linear structure and self-aware humour – creates a thought-provoking contrast between reality and ‘reel life’.

Verdict: A potent and magnetic mystery-thriller.

Back in the 1990s, one well-known comic-book writer sparked up the perfect concept for a truly unforgettable graphic novel. As a political and social satire, the Sin City series skewers everything our capitalism-run world has, and will ever have, to offer. Amicably, creator Frank Miller didn’t aspire to make millions when it was first released. In fact, if you read anything he’s done, or listen to any of his interviews, his unique viewpoints still stand tall. With that in mind, his recent cinematic endeavours come off as wholly contradictory and hypocritical.

With his latest project, Sin City: A Dame to Kill For, he and co-director Robert Rodriguez are simply treading old ground for a quick profit. With this instalment blazing through cinemas, the question Should asked: why is it  coming out nine years after the first one? With the 2005 original breaking the mould for comic-book adaptations, and becoming a critical and commercial surprise hit, why did it take so long? Sure, the 2008 Global Financial Crisis hit several major studios hard. However, that didn’t stop Rodriguez and Miller from crafting mega-flops like The Spirit and the Machete double. Our two pop-culture conquerors built this bewildering comeback effort from the ground up. Developing a powerful concoction of film noir, exaggerated comic-book gloss, and gritty action extravaganza, this rushed return delivers momentous highs and lows. Spreading several stories across this nightmarish ordeal, the hidden ingredients fuel its best moments. Sadly, these ingredients are hard to find. First off, in ‘Just Another Saturday Night’, we see the violent return of hulking badass Marv (Mickey Rourke). With no recollection of his past, Marv tries to figure out how and why he crashed a car before murdering several teenage gangsters. Next up, in ‘The Long Bad Night’, we are introduced to slick poker champ Johnny (Joseph Gordon-Levitt). Swaggering into Kadie’s Saloon, he hits the slot machines before besting the all-powerful Senator Roark with the cards. Soon after, Johnny is taught one major lesson: don’t mess with a Roark!

Eva Green and Josh Brolin chewing on the scenery AND each other.

These stories, rekindling the original’s invigorating tone and consistent pacing, make for a cracking first third. Throwing old and new characters through this awe-inspiring universe, the opening scenes deliver over-the-top action beats and emotional resonance. In addition, these sequences set up a magnetic mystery-thriller vibe for the narrative to capitalise on. Unfortunately, the middle and final thirds fail to deliver on the first’s promises. The third storyline, ‘A Dame To Kill For’, takes up a significant part of this instalment’s efficient run-time. After Dwight (Josh Brolin) falls for yet another one of Ava Lord(Eva Green)’s tricks, the movie’s gratuitously eyes down the slinky dames and leather-clad hookers of Old Town. With Gail (Rosario Dawson) and Miho (Jamie Chung) leading the charge, the titular storyline becomes a lugubrious mix exposition and tiresome twists. In addition, some sub-plots hinder this vignette’s overarching impact. One story-line, involving a conflict between detectives Mort (Christopher Meloni) and Bob (Jeremy Piven), sucks the tension and gravitas out of this otherwise intriguing narrative. However, the final third’s vignette, ‘Nancy’s Last Dance’, in which Nancy Callaghan (Jessica Alba) – recovering from saviour John Hartigan (Bruce Willis)’s suicide – heads straight for Roark, lacks this series’ coherency, humour, and allure. Relying on kooky comedic moments and tiresome action beats, this storyline is nowhere near as creative as Rodriguez and Miller think it is. Ultimately, our two writer/directors never blend these heavy-handed, sequel/prequel-purposed vignettes together effectively. Thanks to overcooked dialogue, hokey narration, and misogynistic overtones, Miller’s involvement nearly eviscerates this puzzling instalment.

“Sin City’s where you go in with your eyes open, or you don’t come out at all.” (Johnny (Joseph Gordon-Levitt), Sin City: A Dame to Kill For).

Creating ‘The Long Bad Night’ and ‘Nancy’s Last Dance’ specifically for this adaptation, Rodriguez and Miller’s latest effort awkwardly fuses their once-celebrated styles with more-recent ticks. As two great tastes that don’t go together anymore, Miller’s cynical perspective and Rodriguez’ nostalgia-drenched glow never blend. Fortunately, Sin City: A Dame to Kill For clings onto the original’s breathtaking visuals. In fact, Rodriguez’ style pays off throughout. Bolstering their black and white creations, his atmospheric direction delivers several memorable flourishes and captivating compositions. Indeed, his cinematography, editing, and production design choices elevate every sequence. Filling certain frames with smoke, chiaroscuro lighting patterns, kinetic colour splashes, blood splatters, and breasts, his direction bolsters Miller’s nihilistic narrative and abrasive character designs. The action, despite harming the climax, bolsters certain panels and ideas. Above all else, Rodriguez deserves credit for rewarding such respected performers. Credit belongs to this obscene cast for fuelling this belated instalment. Despite the obvious nine-year hiatus, Rourke, Alba, Boothe, and Dawson efficiently sink back into their beloved characters. New cast members including Brolin, Meloni, Piven, and Dennis Haysbert perform adequately despite the challenges involved. However, chewing up the scenery, Gordon-Levitt and Green stand out in valuable roles.

Beneath the wind and rain coursing through Sin City: A Dame to Kill For, Rodriguez and Miller languish in its seedy underbelly. Immersing themselves within this world, these writer/directors fail to re-capture the original’s imagination and vigour. Becoming an oppressive parody of original, this instalment comes off like an ageing stripper – once flexible and courageous, now belligerent and unconvincing. However, credit belongs to Rourke, Brolin, Gordon-Levitt, and Green for embracing their surroundings and delivering splendid turns in two-dimensional roles. Clearly, in going by the trailer’s advice, they went in with their eyes open.