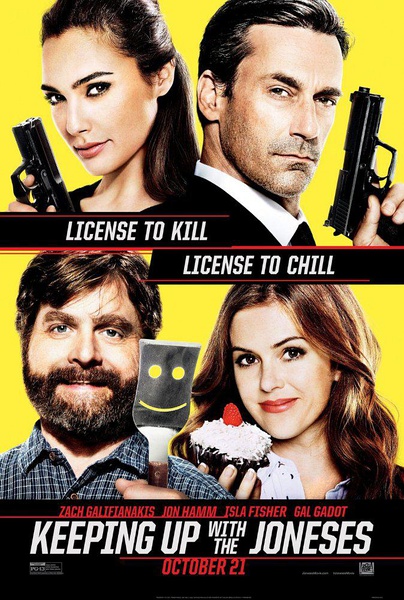 Comedy is one of modern entertainment’s most subjective genres. One man’s trash is another’s treasure; what some may perceive as humor may deter or anger others. 2016 has seen big-budget messes like Bad Neighbours 2, the Ghostbusters reboot, Zoolander 2 and Mike and Dave Need Wedding Dates come and go without impact. Keeping Up with the Joneses, sadly, continues this laughless downward spiral.

Before I attack Keeping Up with the Joneses mercilessly, I will say the premise is wholly compelling. The movie follows suburban married couple/loving parents Jeff and Karen Gaffney (Zach Galifianakis and Isla FIsher). Sending the kids to summer camp, the pair are stuck in a rut. Jeff lives for his meaningless HR department position at a local, government-affiliated company. However, Karen becomes restless and bored at home. Her freelance interior decorator role fails to satisfy her itch for excitement. Soon after, attractive couple Tim and Natalie Jones (Jon Hamm and Gal Gadot) move in next door. Of course, they aren’t who they seem.

Keeping Up with the Joneses, like so many Hollywood comedies, collects elements from several, much-better movies. Similar action-comedies (Mr and Mrs Smith) aptly balance the humour and set-pieces. Overall, there is an army of better movies out there. Writer Michael LeSieur does not even attempt to reinvent the wheel. The story, such as it is, is as bland and banal as expected. Indeed, everyone involved seems not to care about it. It is a shock to the system when the plot kicks into gear. Thanks to laughable exposition and plotting, the director and actors seem to switch off at seemingly important moments. Despite the premise, the spy-work is never shown on-screen. Tim and Natalie’s mission is lost in favour of cheap set-pieces and bad dialogue/gags.

Keeping Up with the Joneses, in true Adam Sandler fashion, is condescending and sweet to its audience. The first half mocks suburban lifestyle, painting the men like cretins and women like nagging shrews. Unable to commit, the movie’s half-assed turn makes everyone and everything cheesier. The comedy is shockingly hit and miss. Director Greg Mottola forgets what made his earlier flicks (Superbad, Adventureland) so engaging. Here, his comic timing drags down the performers. The jokes feature excessive awkward pauses rather than punch-lines. The cast do their best with woeful, unimaginative material. Galifianakis, a hit-and-miss talent himself, is fine in his small-town-hero role. Meanwhile, Hamm is a force of charisma and likeability. Fisher’s screechiness ruins yet another role. Sadly, Gadot is yet to master anything beyond kicks and punches.

Keeping Up with the Joneses doesn’t deserve a one-word review, let alone all the words written by the world’s bloggers/reviewers. Like most 2016 movies, this lazy action-comedy evaporates from memory before leaving the theatre.