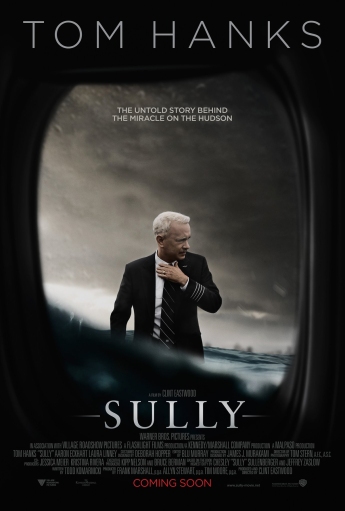 Two-time Academy Award winner Tom Hanks is a national acting treasure and all-around nice guy. Since the late 1980s, he has mastered roles of immense passion and of varying genres. His down-to-earth attitude and raw charm engage audiences across multiple generations. In an age of brand recognition over movie-star prowess, the 60-year-old still delivers results. His work in Sully is no exception.

Sully centres on a story about an American hero, told by an American hero whilst starring another American hero. Hanks teams up with Hollywood legend Clint Eastwood for this 21st Century tale of hope. It details the events before, during and after the famous ‘Miracle on the Hudson’ incident. On January 15th, 2009, Airline pilot Captain Chesley ‘Sully’ Sullenberger began his day at work like any other. He and First Officer Jeffrey Skiles (Aaron Eckhart) boarded US Airways Flight 1549 from LaGuardia Airport, outside New York City, with ease. However, three minutes into the flight, a flock of geese tore apart both engines. Unable to make it back to LaGuardia or to any other airport, Sully and Skiles made a forced water landing on the freezing Hudson River and saved the 155 souls onboard. Witnessed by New York and the world, the rescue efforts included the pilots, cabin crew, passengers, ferry/coastguard crews and police.

Docudramas generally involve war, conflict, and heartache to create drama and begin discussion. So, how could anyone make a Hollywood feature out of said good news story? Sully resembles a detailed and fascinating piece of investigative journalism. Eastwood and screenwriter Todd Komarnicki, adapting Sullenberger and Jeffrey Zaslow’s book about the event, capture the biggest and smallest details. The pair raise the tension and stakes with every new detail. Eastwood’s directorial filmography includes several hits and misses. The 86-year-old filmmaker and outspoken Republican puts everything aside for ol’ fashioned authenticity. His previous directorial efforts, from docudramas (Letters From Iwo Jima, J. Edgar) or character pieces (Million Dollar Baby, Gran Torino), steadily portray the ins and outs, from go to woe. Here, he crafts a peculiar non-linear sequence with painstaking intensity.

The opening scene is a twisted dream sequence. Setting the audience on edge, the scene hurls us into the hero’s inner turmoil. It leaps between the incident, Sully’s loneliness, the air crash/insurance investigation, his wife back home (Lorraine (Laura Linney)) and flashbacks. Sully could have been a long and meandering mess preying on basement-level fears. However, the movie sways gently between intensifying dread and hope against the odds. Eastwood and co. present the incident itself from multiple points of view (a mother and daughter, golfers late for the fight etc.). The entire set piece makes for, arguably, the year’s best movie moments. This flawless recreation proves truth really is stranger than fiction. Hanks may get his latest Oscar nomination. Prone to playing nice guys and real-life heroes, the legend provides raw passion and cutting humour.

Sully showcases some of Hollywood’s best in fine form. Eastwood’s silky-smooth direction pays off tremendously. Meanwhile, Hanks and Eckhart bounce off one another with ease. Like its titular hero, the movie is a tough, powerful and interesting ode to human spirit.