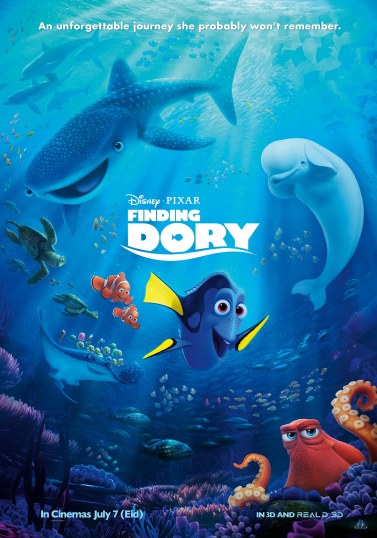 Disney is one of the world’s most powerful companies, capable of ruling over the box office from here to eternity. Along with Star Wars and Marvel, the company also owns Pixar Animation Studios. Setting the bar for animated cinema, the studio makes us laugh, cry, and question our place in the universe. Finding Dory, although not quite up there with Pixar’s best, continues the studio’s penchant for unique voices (in front of the microphone and behind the scenes).

Finding Dory is the much-anticipated sequel to 2003’s smash-hit Finding Nemo. The original’s fun visuals and sense of humour helped it become one of the past decade’s most memorable movies. As illustrated by the title, the sequel focuses on sidekick turned fan favourite Dory (Ellen DeGeneres). Set one year after the events of the original, the movie explores the Blue Tang’s struggle with short-term memory loss. Despite growing close to Clownfish Marlin (Albert Brooks) and Nemo (Hayden Rolence), Dory begins having fragmented dreams and flashbacks to life with her parents, Jenny (Diane Keaton) and Charlie (Eugene Levy). After regaining some of her memories, she feels a sudden urge to find them. In true Pixar fashion, our heroes head off on a literal and figurative journey over hundreds of miles.

There are two versions of Pixar: one creates game-changing and thought-provoking adventures appealing to all four quadrants. The key examples – the Toy Story trilogy, Monsters inc., The Incredibles, Wall-E, Up, Ratatouille, and Inside Out – exceed all expectations. The other side of the coin includes polarising/cash-grab entries including the Cars movies, A Bug’s Life, Brave, and The Good Dinosaur. Like Monsters University, Finding Dory lands somewhere in the middle. Don’t get me wrong, I would take Dory over the Minions any day. This time around, the crew – heading from the Great Barrier Reef to straight to the Jewel of Morro Bay, California – meets a school of new and eclectic characters stuck in a marine park. Although a new setting is always welcome, the plot largely resembles that of the original. Despite the overall familiarity, however, the stellar visuals and rollicking pace are worth every second.