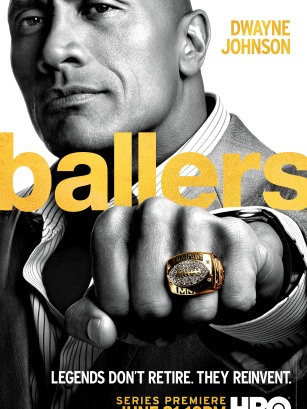 In 2004, HBO franchise Entourage delivered the ultimate frat-boy, rags-to-riches fantasy. The show, delivering vicarious thrills via babes and big houses, became a trendsetter of gargantuan proportions. Today, with equality the aim of the Hollywood game, the show and movie have become a sad indictment of mid-2000s idiocy and greed. Sadly, for Dwayne Johnson more than anyone, HBO sports-dramedy Ballers simply cannot escape Entourage‘s soul-sucking shadow. However, thanks to its charismatic lead actor, it still has enough potential to step up with all guns blazing.

Ballers, despite significant flaws early on, has enough potential to become one of the year’s most entertaining shows. The pilot sets up season 1’s intriguing premise, but fumbles before reaching the end zone. American Football is now drenched in controversy. The NFL, refusing to take responsibility, has seen some of its biggest stars commit atrocities including rape and domestic violence. Less importantly, on-field incidents including Deflategate have made NFL a laughing stock. Stuck between Any Given Sunday and Jerry Maguire, the series focuses on former player turned sports agent Spencer Strasmore (Johnson), pushed by financial advisor Joe (Rob Corddry) to “monetise” his ‘friendships’. His early retirement, at the hands of crippling concussion, has affected his health, psychology, and finances.

Like Maguire, Ballers covers a handful of ego-driven superstars on the brink of wasting such unequivocal potential. Ricky Jerret (John David Washington), leading a debaucherous lifestyle, may soon lose his roster spot for the upcoming season. Vernon, however, cannot help but throw money at family members and friends. Meanwhile, similarly to Spencer, Charles Greane (Omar Benson Miller) is a nice-guy former athlete searching high and (painfully) low for his future career path. The pilot gave us a taste of future conflicts, with top-tier sports agent Jason (Troy Garity) and Miami Dolphins executive Larry (Dule Hill) popping up at opportune moments.

The pilot attempts an out-there fusion of over-the-top bromantic dramedy (Entourage) and in-depth character study (Jerry Maguire). Despite the bright, fun imagery and cool cast, the episode’s tonal shifts leave cause for concern. Its oil-and-water trajectory – between brash comedic moments and maudlin soul-searching – hit like a defensive lineman. However, even on shaky ground, its core ingredients make 30 minutes fly like Russell Wilson. Spencer, crushed by his former teammate’s death, is more likeable than most HBO anti-heroes. Balancing out the sex and pill popping, his guile and charm elevate the show’s slower moments.

Mainstream hot-shot Peter Berg, having worked with Johnson on Welcome to the Jungle over a decade ago, revels in the high-class lifestyle the show’s lead characters take for granted. The pilots run-time is packed with sex scenes, nightclub sequences, and stilted camerawork gazing longingly at multi-million dollar mansions. However, Berg never forgets to highlight professional sport’s indestructible dark side. The episode’s many ups and downs, from Jerret’s out-of-control behaviour to Spencer’s first few successful meetings, illuminate one key aspect – humanity is essential to any industry.

Ballers‘ first episode, though an awkward kick off, showcases enough potential to deliver one of contemporary TV’s most lively and enjoyable dramedies. Johnson and Berg, overcoming Entourage‘s suffocating and dated allure, provide solid groundwork to get their latest creation off and running.