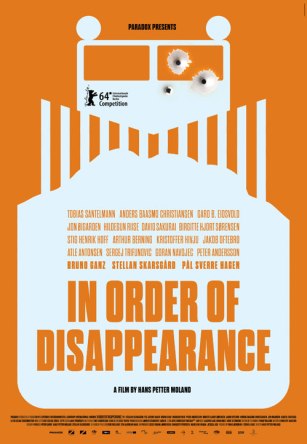 Ever tried finding a needle in a haystack? Difficult, isn’t it? Well, imagine looking for a cocaine brick in a snowstorm. Now that’s a frustrating endeavour! This strange dilemma/contemplative thought sums up Norwegian crime-comedy In Order of Disappearance. In a year of unfunny comedies, expansive blockbusters, and cumbersome Oscar hopefuls, This crime-comedy wants to be known simply as: “that little Scandinavian flick that could”. Hey, there is nothing wrong with that! 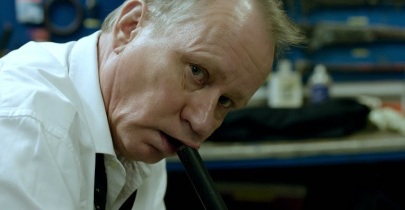 In order of Disappearance strives to call out and dissect Hollywood’s sanitized, sanction-heavy practices. In fact, it skewers everything from influential gangster/action flicks to Europe’s crumbling economic status. Sure, this isn’t the first crime-comedy with a mean streak. Boiling-pot satires In Bruges and Seven Psychopaths did this years ago. Enough with this movie’s searing viewpoints, what is it actually about? Well, to put it simply, it’s about everything and nothing simultaneously. This vague statement will become relevant whilst watching it. It follows a near-retirement slow plough driver, Nils (Stellan Skarsgard), dragging himself from one day to the next. Despite being awarded Citizen of the Year by his quaint hometown, he feels unfulfilled and underappreciated by his family. His life takes a shocking turn after his son dies of a suspected drug overdose. As we see in the first few minutes, his son crossed the wrong drug traffickers. From that point forward, Nils’ life spirals out of control. His wife succumbs to shock and rage, his work life becomes a meaningless chore, and his well-being is destroyed. Certain revelations, preventing Nils from ending it all, propel Nils to keep going. 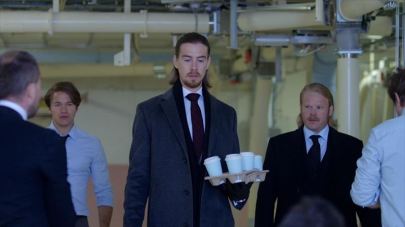 Determined to destroy those responsible, Nils carries out a layered private investigation of a local mob outfit and their Serbian rivals. In Order of Disappearance, from the opening hunter-becomes-hunted set-piece onwards, develops several questionable plot-lines and character traits. Nils, a reliable and submissive worker-bee, can suddenly stalk, trick, and murder vicious criminals without prior experience. The movie leaves several twists and turns without reasonable explanation. Despite said logic gaps, the narrative itself is just so fascinating! Like Nils, you are constantly on the look out for surprises. This crime-comedy delivers constant thrills whilst never talking down to its unsuspecting audience. Keeping us constantly engaged, It places certain affectations and ideas into the backgrounds of certain sequences. The Norwegian drug-runners, led by eccentric douche Greven (Pal Sverre Valheim Hagen), are comprised of blonde-haired, fashion-friendly, bloodthirsty badasses. These characters are given enough development and kooky traits to push the story along. In particular, it examines Greven’s inflated ego, vegan diet options, and modern art collections intensely. But hey, drug-traffickers and gangsters are people too.

“You Chinese are the Jews of Asia.” (Greven (Pal Sverre Valheim Hagen), In Order of Disappearance). 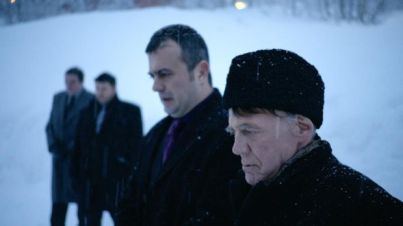 In Order of Disappearance shoots down modern genre conventions and pop-cultural stigmas in a fiery bloodbath of comedic jabs. Like Nils stalking his victims, this crime-comedy pits modern Hollywood crime/action flicks against those from other countries. Paying homage to Quentin Tarantino, the Coen Brothers, and Martin Scorsese, multiple scenes – in which henchmen delve into profound philosophical discussions – illustrate the movie’s intentions immaculately. It even rubs against the veteran-action-star trope. Nils’ sociopathic behavior repels us from the typical Liam Neeson/Denzel Washington/Keanu Reeves archetypes plaguing cinema screens today. Oddly enough, its comedic moments resonate more than the story or characters. The spirited direction and visual flourishes heighten the tension and profound emotional impact, giving its wacky moments greater impact. The slapstick sequences, hyper-violence, and witty dialogue add to the movie’s ever-lasting, self-referential glow. The movie lets its characters off the leash – henchmen frolic in the snow before their mission commences; Greven and his ex-wife’s quarrels become increasingly silly and idiotic; two homosexual gangsters seek to dispel common misconceptions. Somehow, it’s all in good taste.

Above all else, Skarsgard’s magnetic performance, as the deadly third-wheel, elevates this spirited crime-comedy. The top-tier character-actor, known for supporting roles in everything from Thor to Melancholia, excels as the silent yet soulful avenging angel. Thanks to its charismatic performances, insightful references, and attention to detail, this crime-comedy is a genre-bender willing to place Hollywood and Scandanavian crime-thriller on the chopping block.

Verdict: A fun and ferocious crime-comedy.