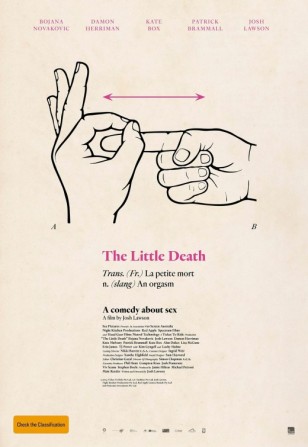 Despite the consistent quality and commendable intentions, the Australian film and television industry is stuck in a critical and commercial pot-hole. Allowed few resources, many  productions use out-of-the-box ideas to impress audiences. Today, film-goers gravitate more towards spectacle than story or character. Sadly, our cinematic accomplishments are either ignored or brushed off. Despite the heavy subject matter of entries like Somersault and Animal Kingdom, there are brighter efforts out there.

This year, our industry has steered itself in a whole new direction. Analysing specific demographics and trends, genre flicks like The Rover, Predestination, and The Babadook received enough attention for wide release distribution. Now, thanks to talented comedic actor Josh Lawson, modern sex-comedy The Little Death is tickling us in all the right places. This romantic comedy figuratively – literally, depending on your tastes – explores our many sweet spots. Examining sex’s natural and unnatural elements, this project gives new meaning to the term: “down under”. The movie discusses sex, romance, death, marriage, taboo, and everything in between. In fact, given its out-there premise, I’m surprised it didn’t explore the terrors of taxes and insurance claims. Don’t be afraid, this local effort is actually a breath of fresh air. The narrative juggles several peculiar story-lines and characters. Dealing with multiple couples, the story touches on many life stages. We are first introduced to an attractive couple, Paul (Josh Lawson) and Maeve (Bojana Novakovic), in full cuddle mode. Maeve, afraid of her emotions, asks Paul to fulfil her rape fantasy. Meanwhile, Dan (Damon Herriman) and Evie(Kate Mulvany)’s marriage counsellor tasks them with conducting role-play to spice things up.

In addition, Richard (Patrick Brammall) and Rowena (Kate Box) must adjust to a loved one’s sudden death. Bafflingly so, Kate’s libido kick-starts whenever Richard cries. Propelling the narrative from light-hearted fluff into unadulterated overdrive, Lawson elevates said three plot-threads  above everything else. Connecting each strand, we see a middle-aged man, Steve (Kim Gyngell), informing his new neighbours of two things: he bakes Golliwog cookies and is a convicted sex offender. The three central story-threads, despite the exposition-driven set-ups, are almost worth the admission cost. However, Lawson, handing himself the lead role, lends significant attention to his and Novakovic’s plot-line. The other two, despite the positive vibes, are given little personality. Beyond our central story-lines, we get several underdeveloped and listless strands. One sub-plot, involving a loveless marriage between desk jockey Phil (Alan Dukes) and ball-busting housewife Maureen (Lisa McCune), goes nowhere. The intricate narrative, born from Lawson’s hyper-snappy mind, is The Little Death‘s biggest flaw. Despite the ambition, Lawson’s talents don’t stretch to fit the feature format. Introducing story-lines and character arcs at random throughout, Lawson’s screenplay resembles a brainstorming session gone horribly wrong. Despite the intriguing premise, none of its plot-strands connect succinctly. Despite the occasional meet-ups, restricts our characters to their specific threads.

“Whatever happened to good all fashioned, run-of-the-mill sex? People have to complicate it with all this kinky shit.” (Glenn (Ben Lawson), The Little Death).

Whilst promoting The Little Death, Lawson landed himself in controversy by slamming the Aussie film industry’s dark side. Putting his first feature on a high pedestal, Lawson’s high-minded promises aren’t fulfilled. Having achieved recent success with TV corporate-drama House of Lies, the export’s vanity project lands with a whimper instead of a, ahem, bang. Introducing, picking up and dropping sub-plots and character arcs without warning, Lawson’s feature – busy riding  mainstream and indie tropes – never develops a satisfying through-line. Thanks to the movie’s disparate structure, it becomes a series of skits, pratfalls, misunderstandings, and miscommunications. Its skittish story-telling tropes – used to expand the wafer-thin narrative – overshadow the more alluring ideas and scenarios. These sketches, despite the pitch-perfect comedic timing, amplify the screenplay’s lack of charm, guile, or emotional resonance. Despite the flaws, the movie bares several positive aspects. The dialogue, alleviating the tension, elevates certain sequences. In addition, its talented performers elevate the mediocre material. Sadly, Lawson’s commentary on suburbia and relationships is startlingly condescending. Focusing on good-looking, upper-middle class people, the movie alienates a significant portion of its audience. With first-world problems guiding the narrative, most of its conflicts become cold-hearted. Lacking resolutions, Lawson’s daring vision never pays off.

The Little Death, almost reaching crying-after-sex disappointment, is saved by its…climax. A sign language translator, Monica (Erin James), is caught between a deaf man and a phone-sex operator. Interpreting their horrific words, the translator gains a firm understanding of the world around her. This scene pumps blood towards the movie’s heads. However, despite Lawson’s ambition, his first feature goes hard and fast for only short bursts.