In the 1990s, TV producer, writer, and director David Chase took a big chance on an intriguing premise. Showcasing one crime family’s good times and bad blood, HBO’s The Sopranos reigned supreme from 1999 to 2007. Thanks to its immense prowess, Hollywood recognised the hype and made many film and TV copycats. Despite the arresting Godfather-like concept, the world became awe-struck by its portly leading man – James Gandolfini. 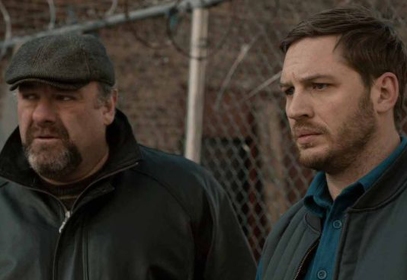 Latching on to The Sopranos and James Gandolfini’s aura, crime-drama The Drop pays tribute to lost people and genres. Honouring the character-actor’s immense career and persona, the movie lingers on many intriguing elements. As the latest in a string of existential crime-thrillers, the movie throws the studio system, the gangster-thriller genre, and Middle America to the wolves. Oddly enough, despite Gandolfini’s immense acclaim, the late Tinseltown icon is not the movie’s lead. In fact, along the way, we uncover several mesmerising aspects. The Drop revolves around one of America’s most dilapidated neighbourhoods. The story focuses on a modest watering hole – tucked inside Brooklyn, New York – known to some of America’s crummiest low-lifes. Cousin Marv’s, housing many strong whiskeys and nasty surprises, is run by socially awkward bartender Bob Saginowski (Tom Hardy). Taking orders from Marv (Gandolfini), Bob runs the joint more diligently than his own life. Working extensive shifts, our lead floats through a tiresome routine. Forced to confront unlikable citizens, Bob and Marv understand the rules of the game. Marv, having handed the bar over to the Chechen mob several years earlier, succumbs to immense stress and emotional detachment. Despite the subdued drama, the movie lays everything out on the table.

Embracing its simple-yet-effective premise, The Drop is a chilling and resonant crime-thriller. In fact, the story delves into the ‘drop bar’ world. Used to launder pockets of cash from suspect business dealings, Cousin Marv’s becomes this dynamic narrative’s heart. After a frightening robbery, the movie drops its guard and delivers a moody and philosophical tale. The central plot-line, dealing with the mob wanting its missing $5000 back, propels the otherwise stagnant narrative. Based on Dennis Lehane’s short story Animal Rescue, The Drop relies on Lehane’s style for drama and thrills. Similarly to previous Lehane adaptations, Gone Baby Gone and Mystic River, visceral moments and comedic riffs complement one another. Subbing multiple players into the game, Bob and Marv become intent on settling the score and keeping everything flowing smoothly. Bob – introduced to a lost, injured puppy and Nadia (Noomi Rapace) within minutes – becomes a fascinating specimen. As our hearts melt for his new four-legged friend, The Drop becomes more approachable and entertaining. Flipping through gangster/crime-thriller tropes, the story occasionally creaks and groans. Compared to recent revenge fantasies including Blue Ruin, Killing Them Softly, and Cold in July, its airlessness and ponderousness may deter some viewers. However, the emotional core remains strong throughout. As Bob and Nadia’s friendship develops, the emotional resonance covers up the glaring flaws.

“There are some sins that you commit, that you can’t come back from, no matter how hard you try.” (Bob Saginowski (Tom Hardy), The Drop). 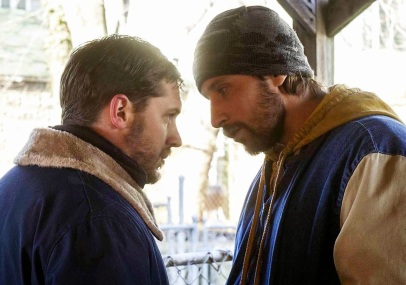 Sticking by Lehane’s solid screenplay, director Michael R. Roskam (Bullhead) brings the swagger and tempo. Coming from a distinctive European cinema background, his style delivers succinct and invigorating bursts of energy. Focusing on humanity and humility, his adaptation balances the crime, romance, and violence with panache and vigour. Bringing Bullhead star Matthias Schoenaerts with him from Belgium (playing seedy badass Eric Deeds), the director takes full control. As egos and tempers clash, Roskam fuses typical  gangster tropes with peculiar flourishes. Experimenting with light and shadow, the bar setting immediately lights up. Dank and sterile, the establishment is a breeding ground for scum and chaos. Throughout the climax, the overcrowded hangout sees sparks, slurs, and bullets. Roskam’s atmospheric direction crafts an earthy and eclectic version of the suburbs. Depicting Brooklyn’s most disturbing and undignified shades, it pays homage to the early Martin Scorsese era. However, despite Lehane and Roskam’s successes, viewers will fall for our two charismatic leads. Hardy – having brought charm to toughies like Locke, Warrior, and Lawless – fits comfortably into this hard-as-nails role. Switching between blisteringly harsh and endearingly sweet, his nuanced performance – aided by a pitch-perfect accent – is an instant drawcard. Despite playing a similar character to Soprano, Gandolfini deserves credit for his haunting and visceral turn. Sparring with Hardy throughout, the movie shimmers whenever the man sniffles, snorts, and wheezes.

Hardy and Gandolfini’s signature dialogue sequence is worth the admission cost. Marv, outlining his former prowess, reflects upon a time since lost. Showcasing the man’s immense talents, this sequence marks a stellar career cut short. Like our lead characters, The Drop strives for respect and earns it long before its explosive last act. Thanks to the immersive performances, tense set pieces, and attention to detail, this crime-thriller is one of 2014’s most deserving successes.

Verdict: A scintillating and well-crafted crime-thriller.