For the past decade, Australian cinema has hidden in the darkest depths of Hollywood’s monstrous shadow. Despite several attempts to increase the Australian Film Industry’s popularity, our cinema continually fails to make valiant strides toward critical and commercial success. However, some home-grown dramas, avoiding labels like “boring” or “depressing”, garner significant acclaim the world over. In fact, 2014’s ambitious, dirt-covered crime-thriller The Rover might just fuel our industry for another few years. 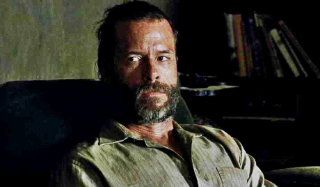 The Rover, despite the minor flaws, makes several effecting and applause-worthy leaps toward critical and commercial success. Hitting harder than most of 2014’s celluloid offerings, this crime-western places itself on the right pedestal. With much more guile and heart than the average ‘Summer’ tentpole, it’s a shame this is being passed up in favour of conventional Superhero extravaganzas and nostalgia-driven actioners. Elevating  the overt sparseness and attention to detail, its worth resides in its desire to be different. Without looking down upon its competition, the movie depicts one of 2014’s most confronting and alluring narratives. This crime-western follows vicious loner Eric (Guy Pearce), as he pushes himself through Australia’s outback wastelands. Close to giving up on his aimless existence, he and his car hurtle down dirt roads in search of salvation. However, his plans change during a routine petrol stop. After a robbery gone wrong, Henry (Scoot McNairy), Archie (David Field), and Caleb (Tawanda Manyimo) dump their damaged getaway vehicle and steal Eric’s. On a mission to track down his car, Eric comes across Henry’s injured brother Rey (Robert Pattinson). Holding Rey as collateral, Eric hunts down the robbers across dangerous heartlands. Along the way, run-ins with military personnel and anarchic citizens pull our two lead scumbags together.

Back in 2010, crime-drama Animal Kingdom boosted the AFI’s box-office stature and its immaculate cast members’ careers. Its writer/director, David Michod, hit the ground running with a grand vision and noble intentions. Here, Michod ventures into a vastly different genre. Mining the same ground as George Miller and John Hillcoat, Michod’s latest effort comes off as a wondrous ode to classic crime-westerns from the past 50 years. As a spiritual continuation of the Mad Max series, The Rover crafts similar tire tracks and bullet wounds. However, with a stripped-back aura in tow, Michod’s writing and direction separates it from true-blue exploitation. Of course, based around an unholy economic collapse, Michod’s story hurriedly veers into darkness. Becoming the next Andrew Dominik, Michod’s rough-and-tumble storytelling highlights valuable moments within dour surroundings. In fact, The Rover‘s twists and turns are bolstered by unique flourishes and profound dialogue. Igniting intensifying shootouts and car chases throughout, this crime-western takes opportunities at pitch-perfect intervals. Uninterested in genre clichés, Michod’s screenplay – aided by Joel Edgerton’s Story credentials – is more modest and meaningful than most of its type. If a threat arises, the screenplay lingers on it like a sniper eyeing down a stationary target. Thanks to a near-wordless first five minutes, the lead character’s actions are worth jotting down for later reference.

“You should never stop thinking about a life you’ve taken. It’s the price you pay for taking it…” (Eric (Guy Pearce), The Rover).

Despite Michod’s mesmerising stranglehold, all crime-westerns of this magnitude suffer similar flaws. Bordering on pretentiousness, the second and last thirds’ wordless sections threaten to drain depth out of the intricate narrative. In addition, with cynical dialogue spattered across vital sequences, the movie’s blisteringly misanthropic outlook almost stalls this otherwise poignant and visceral crime-western. In some instances, Pearce’s lines come off like brutal concoctions of Cormac McCarthy writings and Jim Beam. However, Michod’s direction is worth the admission cost. From the opening sequence onward, his style bolsters this discomforting drama-thriller. Holding his camera steady throughout, his earthy tones throw his follow-up feature into a whole other realm of ingenuity. In certain sections, it’s clear Australia’s latest cinema icon is infatuated by our big, brown land. Switching from bright, desert-laden vistas to blackened mining strips, his ticks heighten the movie’s sensory impact. The score also bolsters Michod’s near-flawless execution. Juxtaposing between the past and present, the indigenous-industrial notes add depth to the meandering plot. However,  the lead performers turn Michod’s vision into reality. Pearce, on a career turnaround with a string of Hollywood hits, reels in every emotion and mannerism for this heartbreaking performance. In addition, utilising specific physical and psychological traits, Pattinson’s scintillating turn establishes an immense hunger for worthwhile roles.

In the vein of The Proposition and The Road, The Rover is a crime-western with the right amount of sass, class, and vigour. Continually breaking new ground, Michod’s latest pushes wider audiences toward Australian genre cinema. Here, his atmospheric direction cements a ground floor for like-minded filmmakers to use. Elevated by powerhouse performances, volatile outback vistas, and prescient storytelling, this crime-western, despite rubbing against the pop-cultural grain, is worth the time, energy, and money.

Verdict: A worthy effort from Michod, Pearce, and Pattinson.

One thought on “The Rover Review – Mad Muthaf*cker”