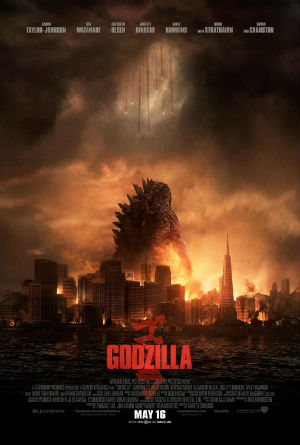 Remember the 1998 Godzilla reboot? It featured a post-Independence Day Roland Emmerich, a bumbling Matthew Broderick, a kooky Jean Reno, and bizarre parodies of film critics Gene Siskel and Roger Ebert. Obviously, thanks to these ingredients, it was a bomb of gargantuan proportions. So, after that critical and commercial flop, how could Hollywood possibly re-reboot the King of Monsters on the big screen?

Well, the re-reboot could look at and imitate other blockbusters of its type. Subtly, this is what this year’s Godzilla re-imagining does. After Cloverfield and Pacific Rim took on the mega-monster genre and came out on-top, Godzilla was tasked with salvaging the titular beast from the disgraceful depths of a cinematic tomb. Thankfully, and ambitiously, the studio executives hired an intelligent and efficient director to tackle this popular subject matter. Gareth Edwards, known for creating indie sci-fi effort Monsters on a $500,000 budget, takes on this project with wide eyes and unique ideas. Indeed, his direction saves this blockbuster from becoming a forgettable retread. However, despite the high points, the movie still comes close to being inexcusably dour and laughably bland. So what does this reboot/remake/whatever do to separate itself from everything else? Ambitiously, from the opening frame, the narrative delves head-on into the darkest aspects of conspiracy theories, military control, and natural disasters. This version kicks off with a family on the edge of obliteration. Nuclear Plant supervisor Joe Brody (Bryan Cranston) oversees one of Japan’s most important facilities. Looking out for his wife Sandra (Juliette Binoche), Joe must watch on in horror as she and the plant are eviscerated by a cataclysmic event. The movie jumps 15 years ahead, and Joe’s son Ford (Aaron Taylor-Johnson) is now a US Navy bomb expert with a lovely wife, Elle (Elizabeth Olsen), and a son of their own.

With familial feuds tested by horrific events, Steven Spielberg’s overwhelming influence casts a gargantuan shadow over Edwards’ style. Here, we see Spielberg’s thematic motifs and technical tropes being checked over and re-tested for our viewing pleasure. Admittedly, I know Edwards isn’t the only action-adventure director to be influenced by Spielberg. However, Godzilla never allows Edwards to craft his own style. Is this a conscious decision or a mistake Edwards will learn from in future sequels/prequels etc? We still aren’t sure, yet. After our characters are introduced, Edwards examines their identities as major life-changing events begin to transform our world. Bailing Joe out of prison, Ford is pulled into Joe’s peculiar conspiracy theory about the events in Japan. Simultaneously, two obsessed scientists Dr. Ishiro Serizawa (Ken Watanabe) and Dr. Vivienne Graham (Sally Hawkins) discover that these 15 year-old events add up to a much larger problem for mankind. These conundrums, used to set up the second-two thirds, rely on the characters more so than the skyscraper-tall monsters. This reboot, despite delivering several jaw-dropping set-pieces, is infatuated with human drama and quiet moments. In fact, Godzilla himself is, ironically, only a minuscule part of this intricate journey. Beyond the first-third’s father-son conflict, the narrative approaches much larger ideas than previous instalments and the aforementioned genre-smashing epics did. The Fukushima Daiichi Nuclear Power Plant disaster and the US Military’s all-encompassing stranglehold lumber through this otherwise efficient re-imagining.

“The arrogance of men is thinking nature is in their control and not the other way around. Let them fight.” (Dr. Ichiro Serizawa (Ken Watanabe), Godzilla).

King of the Monsters!

Sadly, though Edwards’ focus on human drama and relatable situations is appreciated, the narrative is hindered by action-drama clichés and awkward moments. With two-dimensional characters and conventional plot-threads smashing into one another, this reboot lurches lazily between set-pieces and revelations. Thanks to Max Borenstein’s by-the-numbers screenplay, plot-holes and contrivances also disrupt this otherwise entertaining thrill-ride. The characters, continually rattling off exposition and reacting to approaching beasts, distract from the premise’s most alluring conceits. Taylor-Johnson, working with a generic character, is upstaged by his more experienced co-stars. Olsen is under-utilised in a blank-faced role. Meanwhile, Watanabe, Hawkins, and David Strathairn aren’t given distinctive character traits. Thankfully, thanks to Edwards’ vision, the movie’s technical elements reign supreme. Thanks to a dynamic and intriguing opening credits sequence, the movie successfully establishes an ominous tone. Beyond this, the action sequences are wholly awe-inspiring. Defined by an epic scope, confronting cinematography, and impressive creature designs, Godzilla‘s monster battles and gunfights are more momentous than anything Emmerich or Michael Bay could ever hope to deliver. In true Spielberg fashion, the monsters are kept hidden from view throughout the first half. Building to an impressive final third, the movie’s promises pay off thanks to Godzilla and the MUTOs’ ever lasting might.

This Godzilla reboot, hiding under the 1954 original’s monstrous shadow, is a worthy effort. In fact, Edwards and the cast sufficiently overcome the underwhelming material. With the monsters and explosions pushed aside, the human characters do little but yell, look frightened, and run. Edward’s ideas are note-worthy, but would be more interesting if they were able to rise above the premise. If it’s any consolation, Godzilla’s trademark roar is still worth the price of admission.

Verdict: An underwhelming yet enjoyable blockbuster.