Here’s the thing about vampires: they suck! Admittedly, labelling a fictional entity like this is bashful and condescending. However, over the past few years, Hollywood has chewed up and spat out this bloodsucking creature. Though Twilight, Being Human, The Originals etc. don’t reach my demographic, they must be named and shamed for downplaying the vampire’s more dangerous and intelligent aspects. So who possibly can salvage the fanged beast? Thankfully, writer/director Jim Jarmusch (Dead Man, Ghost Dog) has taken the vampire lore back to its sickeningly dark beginnings. His latest feature, Only Lovers Left Alive, crafts an insightful and purposeful tale of two vampires on the edge of expiration. 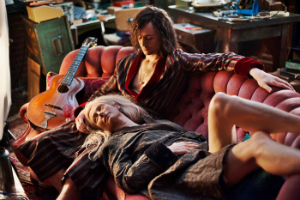 In no way intended for the common target demographic, Only Lovers Left Alive  reinterprets vampiric mythology and human existence. Here, Jarmusch subjects fans and newcomers to a nightmarish and transcendent ordeal. Those who label themselves “Team Edward” or “Team Jacob” won’t, most likely, ever label themselves “Team Jarmusch”. Thankfully, the movie elevates itself beyond those dismal heights. In fact, Jarmusch, in any context, would hate for his efforts to be compared to anything related to pop-culture or escapism. Only Lovers Left Alive throws the severity of everything, including its threatening title, into question. From the opening frame, we are introduced to a twisted and delicious love story. Living a minimalist lifestyle in Tangier, vampiric temptress Eve (Tilda Swinton) exists in a lonely and pervasive society. Collecting blood samples from fellow bloodsucker Christopher Marlowe (John Hurt), Eve longs for a more distinctive and ambitious lifestyle. In the other side of the globe – Detroit, to be exact – Adam (Tom Hiddleston) is a lonely and sullen rock ‘n’ roll icon. Hiding in his dilapidated two-story abode, Adam’s long-term notoriety hurls him into cult-icon territory. Ordering charismatic servant Ian (Anton Yelchin) to do his bidding, Adam’s suicidal tendencies throw his ideologies into chaos. His life, distorted by Eve’s arrival, is further tested by Eve’s promiscuous and enthusiastic sister-in-law Ava (Mia Wasikowska). 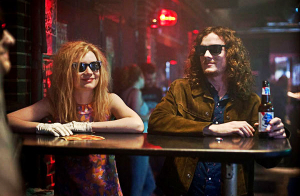 Written and directed by Jarmusch, this established auteur’s latest effort is a kitsch, listless, and tempered examination of its peculiar characters. These vampiric characters exist in a nonsensical and churlish version of the 21st century. Looking through the hourglass, Jarmusch and his creations lurch artistically toward the impactful finale. Today, rushed pacing and established tonal shifts infect genre cinema. Fortunately, this poetic filmmaker goes above and beyond the norm. Dextrously, the devil (or Dracula, in this case) is in the details. The narrative comes together via a labyrinthine structure of idiosyncrasies, existential moments, and visceral flourishes. Adam and Eve – commenting on humanity’s desire for conflict, wealth, and power – look down upon the surrounding “zombies”. Limiting our race to this derogatory title, Jarmusch and his characters seemingly share the same consciousness. Despite its aimless structure, several gem-like surprises reside within witty lines, shocking twists, and gloriously thrilling montages. Delivering a momentous series of set pieces, the narrative places us in the same room as these terrifying nightwalkers. Waxing philosophical about history, mythology, literature, cantankerous human tendencies, and emotions, Adam and Eve’s journey becomes a saucy and concentrated concoction to be slowly sipped on like a Bloody Mary (a drink downed more than once by our protagonists).

“I just feel like all the sand is at the bottom of the hour glass or something.” (Adam (Tom Hiddleston), Only Lovers Left Alive). 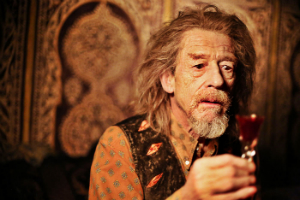 Delivering an Ann-Rice-like tinge, Jarmusch and his favourable cast relish in this genre’s more chilling and impressionistic conceits. Illuminating its characters’ stranglehold on pop-culture, Only Lovers Left Alive becomes as desirable and ambitious as Adam and Eve themselves. Throughout this tumultuous romantic-drama, these immortal beings deliberate on even their own artistic merits. However, delivering overbearing viewpoints on intrinsic topics, Jarmusch’s seminal words and ideas almost overpower his magnetic direction. His agenda, commenting on psychological and societal degradation, undermines this otherwise subtle and heart-wrenching character study. Fortunately, the talented and vivacious cast awaken these gritty, soulless figures. Swinton, once again, steps gracefully through this filmmaker’s universe. Her performance, defined by purposeful mannerisms and a silky-smooth voice, delves fang-first into the material. In addition, Hiddleston and Wasikowska deliver electrifying turns as the story’s more polarising characters. Graciously, Jarmusch’s visual style turns even the most dialogue driven scenes into sensory feasts. Dousing each frame in a pulsating colour palette, Yorick Le Saux’s cinematography lends inspired tones and patterns to this all-encompassing and alarming journey. In addition, with our scarred lovers obsessed with revelatory artistic endeavours, the movie’s bright, bold soundtrack/score delivers pleasurable interludes that breathe life into this meticulous creation.

Drifting beyond its glacial pace and stoic narrative, Only Lovers Left Alive elevates its vampiric characters above those of recent cinematic iterations. Fuelled by existential angst, scintillating romantic interludes, and Jarmusch’s sensuous visuals, this movie examines our infatuation with nostalgia, gothic fiction, and the First World order. Jarmusch, as valuable to the narrative as Hiddleston’s skinny physique, examines yet another genre and delivers an idiosyncratic, intensifying, and indulgent work of art. As expected, this indie darling becomes a vampiric love story with…bite.

Verdict: A moody and electrifying romantic-drama.