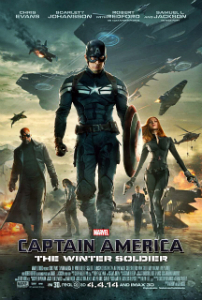 Set two years after the spectacular yet catastrophic Battle of New York in mega-smash The Avengers, Marvel latest Phase 2 juggernaut, Captain America: The Winter Soldier, looks up into the universe for ideas. No, unfortunately, this instalment has nothing to do with Thor, Thor: The Dark World, or Guardians of the Galaxy. Honourably, aiming to become truly extraordinary, the movie seeks recognition. This instalment, ignoring the massive success stories that came before it, changes the game for future sequels, adaptations, and TV series’.

So, what did I think of the final Product? Well, I have to commend Marvel Studios, and Captain America: The Winter Soldier‘s cast and crew for pulling off a visceral and all-encompassing sequel. Eviscerating the Marvel Cinematic Universe’s preceding sequels, this movie shows Hollywood exactly how it’s done. Watch out Spider-man, X-Men, and Guardians of the Galaxy, the “star-spangled man with a plan” means business. Ascending above Iron Man 3 and Thor: The Dark World, Captain America: The Winter Soldier is a lively and ambitious effort unafraid of The Avengers’  conquering shadow. Here, aliens, gods, and monsters aren’t even mentioned. Some may believe this to be an idiotic decision. However, this instalment seeks to pull apart everything we’ve already learnt about this franchise. Here, unlike the kitsch 2011 original, there are no guidelines, black-and-white strokes, and corny dialogue. In fact, the movie kicks into overdrive at exactly the right moments. Captain America/Steve Rogers (Chris Evans), now completely thawed out of his icy tomb, finds the 21st century to be an even greater threat than Loki, alien hordes, and the Tesseract combined. Transitioning from 1940s Brooklyn to 2010s Washington D.C., Rogers feels uncomfortable even in seemingly normal surroundings and situations.

Sensitively, despite Cap’s red, white, and blue facade, this instalment strips stars and stripes off the flag before dousing it in shades of grey. Carrying around a to-do list listing pop-culture’s most transcendent aspects (Steve Irwin, Rocky etc.), Rogers looks to others for guidance. From the opening scene, in which Rogers overlaps selfless war veteran Sam Wilson/Falcon (Anthony Mackie) on their morning jog, Rogers’ character arc becomes insatiably potent. The movie re-introduces us to this straight-laced superhero in a succinct fashion. Sporting an enviable physique and approachable personality, Rogers overshadows Cap’s star power and superhuman abilities. From there, the movie delivers many shocking and tangible twists and turns before the explosive finale. With athletic agent Natasha Romanoff/Black Widow (Scarlett Johansson) by his side, Rogers notices several peculiar occurrences. Unsure of whom to trust, Rogers and Romanoff suspect security agency SHIELD, led by Nick Fury (Samuel L. Jackson) and Alexander Pierce (Robert Redford) in their Triskelion headquarters, of carrying out ethically questionable actions. Soon enough, tempers and allegiances reach breaking point before Rogers and Romanoff are branded as threats to democracy. Thankfully, before even the titular assassin is introduced, Captain America: The Winter Soldier strives to be the most intelligent and thought-provoking instalment yet.

Thanks to politically-charged overtones and pragmatic characters, the movie draws the line between worldwide peace and overwhelming chaos. Seeking a 70s conspiracy-thriller vibe, the narrative throws in several unexpected chills, thrills, and kills. Despite being comparable to All the Presidents Men (thanks mostly to Redford’s inclusion), the relevant socio-political commentary makes it, essentially, the year’s best Jack Ryan flick. In this instalment, each character’s actions spark major ramifications that could potentially re-configure entire governmental, economic, and social layouts. Rogers, introduced to a paranoid and cynical version of his stouthearted country, brings 40s ideals to every motivation, action, and judgement. In fact, the original feature’s hearty messages are seamlessly injected into its slick and ultra-relentless sequel. However, unlike the original, this instalment doesn’t rely on bubbly supporting characters, boisterous montages, or light hearted moments. This sequel, significantly darker than expected, delivers gritty and momentous tonal currents. Beyond these energetic and revelatory surprises, this series’ over-arching narrative has been radically altered by this instalment’s fundamental revelations. Shifting this series from popcorn-starved schlock to adrenaline-charged, character-based drama, Captain America: The Winter Soldier systematically adapts to preconceptions and delivers an enthusiastically purposeful experience.

“You hold a gun on everyone on Earth and call it protection.” (Steve Rogers/Captain America (Chris Evans), Captain America: The Winter Soldier).

Whether you think it praises liberal principles or right-wing motivations, audiences will lap up Captain America: The Winter Soldier’s analysis of the US Government’s most pressing issues. Brave enough to be intelligent, the movie’s greatest sequences deliver depth, intense action beats, and glorious characterisations. The movie, speeding past previous Phase 2 instalments, justifies its existence. Appropriately, Marvel Studios has defined the similarities and differences between the world’s “good guys” and “bad guys”. If only our real-life public figures could do the same.

Verdict: The best Phase 2 instalment yet!

4 thoughts on “Captain America: The Winter Soldier – The Super-Bourne Ultimatium”