With two blockbuster movies under his belt, Joseph Kosinski has now established himself as an auteur. After his first Hollywood flick, the electrifying Tron: Legacy, Kosinski moved on to his pet project. He has now adapted his own graphic novel into a feature film. Written and directed by Kosinski, Oblivion is filled with wonder but is too derivative and contemplative to be as good as it should’ve been. 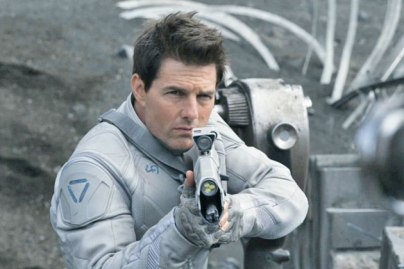 The film starts off with an exposition-heavy prologue. Jack Harper (Tom Cruise) explains everything we need to know before we are sucked into his post-apocalyptic world. He, and partner Victoria (Andrea Riseborough), are stationed on Earth after the apocalypse. They’re in charge of drone security and maintenance. They pick up the scraps that invading Alien forces have left on Earth. The human race is a mere two weeks away from jetting off to Titan (one of Jupiter’s moons).  Every day, Jack is sent out into the wasteland to search for survivors, fix damaged drones, and eradicate alien scavengers. He wakes up in a cold sweat every night, experiencing the same dream about a woman he may or may not know. One day, a strange spacecraft crash-lands on Earth. After surveying the scene, Jack changes his entire outlook on existence and humanity itself. Jack, reluctantly teaming up with resistance leader Malcolm Beech (Morgan Freeman) and crash survivor Julia Rusakova (Olga Kurylenko), must find out why his existence has turned out the way it has.

It’s an overwhelming mix of action and sci-fi tropes. It’s derivative of such influential sci-fi films as 2001: A Space Odyssey, Planet of the Apes, I Am Legend, The Terminator, 12 Monkeys and Total Recall. It smashes together so many ideas and concepts from other films that it forgets to craft its own identity. However, there is still joy to be had with this by-the-numbers sci-fi adventure. Kosinski’s new movie has many of the same problems that his previous film had. Both are visually sumptuous but display Kosinski’s lack of care with story-telling and character development. The first third of the film contains many nods to the Pixar classic WALL-E. Unlike the lively, musical-loving little robot of that film, Jack is a dangerous and contemplative individual. Both characters are fun to watch. Jack looks for scraps on the Earth’s surface whilst asking questions about existence and memory. Both he and WALL-E also find the last plant left on Earth. The film’s glacial pacing is a questionable choice. A film such as this should move quickly to keep its audience excited at every twist and turn. Instead, Oblivion spends too much time on strained relationships and philosophical questions. Thankfully, Oblivion doesn’t become pretentious, dumb or muddled like many modern sci-fi flicks (Prometheus).

Oblivion has a focused first half and a confusing and plot-hole-filled second. Despite my complaints, it’s nice to see an up-and-coming director with a keen eye for both sci-fi stories and kinetic visuals. The visual style elevates this film above mediocrity. Kosinski’s love of slick lighting and colour patterns brings both Tron: Legacy and Oblivion to life. Every special effect looks smooth and streamlined. Its Apple-like production design beautifully contrasts the Icelandic settings. These atmospheric and multi-layered scenic vistas are gorgeous to study when the camera lingers on certain images. Oscar-winning cinematographer Claudio Miranda (Life of Pi) livens up this cold narrative. Every shot is precise and touching. The movie is particularly effective when the action sequences kick in. Kosinski loves vehicle chases and futuristic weaponry. He re-invented the Tron franchise with an impressive motorbike chase. Here, the aeroplane/drone battle in the canyons is a stand out sequence. Jack’s jet ducks and weaves through every crevasse in spectacular fashion. However, the action only briefly distracts from the exposition-heavy dialogue sequences. Every-time a dull and derivative cliche pops up, there is an intriguing plot point that is left to the waste-side. However, credit should go to Kosinski for providing yet another thumping score. Much like Daft Punk’s Tron: Legacy soundtrack, M83’s music adds both intensity and scale to nearly every scene.

“I can’t shake the feeling that Earth, in-spite of all that’s happened, Earth is still my home.” (Jack Harper (Tom Cruise), Oblivion). 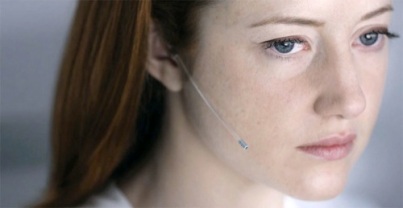 The movie bats you over the head with its environment and political messages. Oblivion soon becomes a haunting reminder of nuclear warfare and enemy invasion. Hopefully, life won’t imitate the events of Oblivion any time soon. Jack is a fascinating character. Despite his philosophical crisis and mental instability, his earnestness and humanistic tendencies make him a likeable character. As usual, Cruise provides enough charisma and magnetism to lift his role. Cruise is lively in some moments and heartening in others. His recollection of the final Super-bowl is a fun moment. Like Solaris, the lead male character falls for a mysterious girl. The love triangle between him, Victoria and Julia could’ve been interesting, but the script fails to develop the female characters. Julia should’ve been a prominent and alluring love interest. Instead, Kurylenko delivers the ‘deer-in-headlights’ look throughout the entire film. Riseborough provides a saucy performance as Victoria. Playing Jack’s friend with benefits and work colleague, Riseborough is much more energetic than Kurylenko. Morgan Freeman makes the most of his underwritten character. He proves that there are many eclectic performances still left in him.

For the most part, Oblivion is a rollicking sci-fi flick. If you can avoid the flaws scattered throughout the film, you may fall for the charismatic performances and glorious aesthetic. Kosinski has a unique eye for visuals, but let’s hope that his next film will avoid jarring tonal shifts and pacing issues.