Abraham Lincoln, the United States’ 16th President, is one of the most important people in history. The world would be a completely different place without his determination and guidance. So who better to tell his story than another inspirational man? Steven Spielberg has handled this though-provoking and poignant story with care.

Lincoln chronicles the last four months of the President’s life. It’s 1865. The Republicans and Democrats refuse to agree. It’s also four years into the Civil War. The Union and Confederacy engage in a bloody battle across America. Everyone wants it to end, but none more so than Lincoln (Daniel Day-Lewis). Lincoln aims to end both the war and slavery. His Emancipation Proclamation has already passed but the 13th Amendment to the Constitution is about to be put to a vote. With the help of Secretary of State William Seward (David Strathairn) and Republican Congressional leader Thaddeus Stevens (Tommy Lee Jones), Lincoln must, by any means necessary, procure the last 20 votes needed to pass the amendment.

There have been many films that deal with slavery and/or Lincoln himself. You can either go in all guns blazing (Django Unchained, Abraham Lincoln: Vampire Hunter) or delicately discuss these important issues. With Lincoln, Spielberg has created his greatest work since Munich (he has made three big-budget films since then). This story clearly means so much to Spielberg. Getting Lincoln’s triumphant story across this way is an achievement. There are many parts of Lincoln’s life that would’ve been worthy of cinematic interpretation. But Spielberg has chosen one significant part to focus on rather than re-creating his entire existence. The four month period shown here is vital to both Lincoln’s personal and professional lives. Instead of re-creating the Gettysburg Address or Lincoln’s assassination, Spielberg provides important reminders of these incidences. The film is based on Doris Kearns Goodwin’s best-selling Lincoln biography Team of Rivals: The Political Genius of Abraham Lincoln. Tony Kushner’s screenplay is a dialogue, and political discourse, heavy examination of a difficult time in America. People who love history and/or political science will love this daring look at Lincoln’s legacy. But people unaware of every detail will be catching up throughout the film’s 2½-hour run-time.

Directors and Presidents sometimes, metaphorically, walk hand in hand. Oliver Stone, for example, loves to push his agenda whilst placing certain Presidents on the big screen (W., Nixon, JFK). Spielberg never focuses too much on trademark flourishes here. There are no overly rambunctious or epic moments. Instead, we see a profound and vital interpretation of a monumental point in history. This is an unexpected and honest film for Spielberg. Schindler’s List and Munich are clearly both major influences here. Lincoln can be compared to other Spielberg films dealing with the same subject matter. Both The Colour Purple and Amistad discuss the ramifications of certain historical events. Amistad (his most underrated film) discussed both racism and prejudice whilst focusing on Djimon Honsou’s slave character. Lincoln, however, focuses on what white people thought of this issue. There are no prominent black characters here. Instead, their viewpoints are represented by Lincoln, his advisor and his political friends. Having no prominent black characters, or even dignified democratic characters, is a wholly subjective way of depicting this story. However, this film is an important reminder of how far democracy has come and how the republican Party has affected history. It also intelligently discusses how the world has treated people who are different. Comparing Lincoln’s administration to today’s Republican Party is cause for heated discussion.

“Buzzard’s guts, man! I am the President of the United States of America! Clothed in immense power! You will procure me these votes.” (Abraham Lincoln (Daniel Day Lewis), Lincoln). 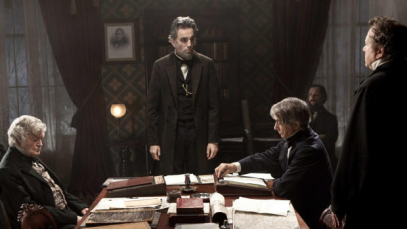 Spielberg sometimes lets his sentimental side get away from him. There are many underdeveloped characters here that are depicted as saints. The huge ensemble cast, including Sally Field, Joseph Gordon-Levitt, James Spader, Hal Holbrook, Jackie Earle Haley, Jarred Harris and John Hawkes, is left to inject some life into thankless roles. To be fair, Lincoln is nowhere as saccharine as some of Spielberg’s other efforts (War Horse). Spielberg’s regulars, composer John Williams and Director of Photography Janusz Kaminski, prove here that they are two of Hollywood’s greatest talents. When the film is at its most rhetorical, Kaminski’s beautiful cinematography stands out. Sunlight and smoke, flushing into every interior dialogue sequence, lend Lincoln a much-needed earthy aesthetic. Occasionally framing him in his notorious and rousing portrait pose, Spielberg has brought a sweet yet tenacious Lincoln to life. Credit should also go to Day-Lewis. Worthy of his Academy Award nomination, the two-time Oscar winner is at the top of his game here. Adding to the remarkable make-up effects, Day-Lewis captures every one of Lincoln’s slight and unique mannerisms. Lee Jones also captivates in one of his more lively performances. Dishing out some truly disconcerting insults across Parliament, Lee Jones is a wryly and conquering presence here.

There is so much to both endure and enjoy in Lincoln. It passionately discusses the importance of both politics and freedom. It may not be worthy of 12 Academy Award nominations, but this is still a remarkable acting and directorial achievement. Honouring the President’s immaculate legacy, Spielberg’s latest effort highlights cinema’s artistic and social merits.

Verdict: Spielberg’s best film in quite some time.