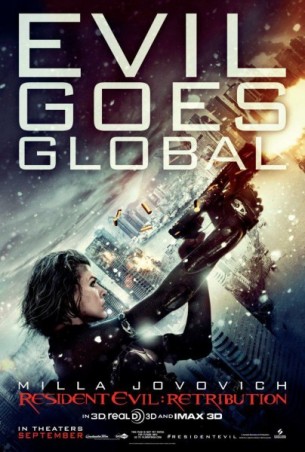 It’s 1968. A filmmaker by the name of George A. Romero has a dream of making the big time in Hollywood. He creates an idea for a new monster to unleash upon terrified audiences. Night of the Living Dead, the first true iteration of the ‘zombie’ is born. 44 years later, his legacy has led to one of the most immortal series’ of our time. That’s not a good thing in this case, as the Resident Evil saga has more than officially outstayed its welcome.

It’s fifth instalment can be described simply as a watered down Romero zombie flick for the iPhone generation. Tearing apart every seemingly interesting opportunity, what is left is merely a shadow of the fun 2002 original and some mildly entertaining sequels.The plot of Resident Evil: Retribution is as frustrating as teaching a child how to solve a rubik’s cube; it’s messy, tedious and forces you to give up after 10 minutes. The moustache twirling baddie-spitting organisation known as ‘Umbrella’ is once again interfering with failed test subject and spandex-clad warrior queen Alice (Mila Jovovich). Recoiling from the events of previous instalments, her capture leads to a series of simulated obstacles, each more trying than the last. Alice, a collection of allies and her fragmented mind must defend themselves against the horde of undead creatures and the vicious Red Queen.

Based on the hugely successful series of video games (now up to no. 6), the relentless and blood-curdling antics of the games far outweigh anything put forth by Jovovich and her hack-director husband Paul W.S Anderson. Anderson (known for such ‘classics’ as Alien vs. Predator, The 2008 Death Race remake and last year’s silly re-imagining of The Three Musketeers) places his lack of filmmaking prowess in full view (along with his wife’s naughty bits). A man clearly interested in the alluring aspects of video game creation over the basics of film production and script writing, his mindset for direction works like a stoner with a sudden rush of ideas for the next great invention. If you missed the last few instalments, everything is unnecessarily explained in minute detail, hopefully getting audiences to revisit the better points of this undead nightmare (specifically Resident Evil: Extinction). This series is clearly his baby, and he intends to prove that with every idea based on a simple “I love this element from the game, we’ll throw that in here!”. Sadly for him Resident Evil: Retribution fails on every level. The fun, violent, techno-action allure from the original becomes sanitised in a film filled with bright lights, simulations and an over abundance of touch screens. The elements of video game story and characterisation have never worked on film, nor will they if Anderson keeps his filthy hands on every adaptation.

Resident Evil: Retribution suffers from repetitive story and action beats, ripped not only from better parts of this series but from completely different movies. Alice’s simulated memories turn her life into the most basic of video games. The elements of surprise, suspense, original action/chase sequences and character interactions are ruined with every contrivance and predictable jump scare hastily thrown in. She wakes up in Dawn of the Dead, Sucker Punch, Aliens, Escape from New York and finally The Terminator, as Anderson once again reveals to have a lack of original thought. Though not surprising given his mindless filmography. All the ‘W.S Anderson’ touches are thrown in for good measure. Long hallways with on-coming obstacles, creatures leap over and over again at the screen, silly special effect-laden set pieces and charisma-less characters are part of the ensemble of bad decisions in this cliche ridden extravaganza. Even his action style, although fun in rare moments here, is a bland hybrid of John Woo’s hyper-violent gun play and Zack Snyder’s slo-mo. The performances from Anderson regulars don’t help much either. Without a suitable reason for bringing in characters from previous instalments, Michelle Rodriguez (Resident Evil), Oded Fehr (R.E: Apocalypse and Extinction) and Sienna Guillroy (R.E: Apocalypse) provide nothing but clones devoid of personality. While Jovovich, despite looking good in black spandex, is all but sinking with this ship.

Despite Paul W. S. Anderson commitment to his own creation, Resident Evil: Retribution marks the beginning of the end for the franchise. Thanks to the nightmarish acting, derivative style, and bland story, this corpse should be put out of its mystery!

Verdict: This undead series should rest in peace.