Having only been two years since the release of the acclaimed Swedish adaptation of The Girl With the Dragon Tattoo, Director David Fincher (Fight Club, Se7en) has used his gritty, low grade visual style and themes describing decaying humanity, to create an even more affecting and alluring version than the original.

In a case of journalistic integrity gone awry, investigative journalist Mikael Blomkvist (Daniel Craig) has been shamed, charged and fined after losing a libel case to a corrupt businessman. Trying desperately to clear his name while ignoring his recent downfall, he is hired by Henrik Vanger (Christopher Plummer), retired CEO of Vanger Industries, to investigate the missing persons case of Vanger’s niece Harriet, who disappeared almost 40 years ago. With Henrik convinced that one of his extended family is responsible and with the possibility of incest and ritualistic murder, Blomkvist must use everything at his disposal to solve this case. Hot on his tail is the gothic yet vulnerable Lisbeth Salander (Rooney Mara), hired to run detailed  background  check on Blomkvist. After discovering her intrusive behaviour, and unbeatable investigative and computer hacking abilities, he hires her to help solve the case and cases of other women murdered in the area. Tensions are raised between the two of them as both the investigation and their emotions reach boiling point.

In this quick-fire American remake of the first in Stieg Larsson’s Millennium Trilogy, Fincher injects his themes and visual style into this story of graphic depictions and emotional explorations. His decayed look at murder from a psychological perspective and the world of investigative journalism is reminiscent of his earlier work; in making the viewer both disgusted and intrigued at the same time. The sparse lighting, bleak colour pallet; featuring a particular use of green, and the grungy opening credit sequence accompanied  by Led Zepplin’s Immigrant Song make this recently adapted story a strong statement of Fincher’s creativity. Fincher directs the violence and rape scenes with a greater intensity than in the original. The Girl with the Dragon Tattoo delves deeper into the method behind the madness as we see the depths of the human psyche and its sometimes severe descent into hell. Fincher’s focus on the reactions of these atrocities delivers a greater emotional impact. The rape scene involving Salander and her handler is both thought provoking and disgusting based on its constant documentation of the emotions displayed. During the ordeal, the camera focuses to certain extent on Salander’s face, showing her as both a deeply scarred and tough personality. Despite some of the plot-twists becoming slightly anti-climactic towards the end, Fincher’s adaptation benefits from strong pacing, a gritty, creepy score from Trent Reznor and Atticus Ross (who also scored Fincher’s The Social Network), the beautiful cinematography capturing the cold, inhumane conditions of both the murders and the snow covered Swedish setting, and an extraordinary level of character depth.

“Hold still. I’ve never done this before, and there will be blood.” (Lisbeth Salander (Rooney Mara), The Girl with the Dragon Tattoo). 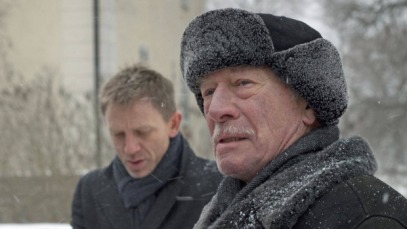 Unlike the original, in which both lead characters were interesting but still could have been defined to a greater extent, Fincher delves deeper into the state of affairs surrounding Blomkvist and his struggle to fit into present society after the trial, and Salander’s disturbed personality and anti hero status. Daniel Craig delivers another great performance, adding a lot of emotion through his facial expressions as well as his convincing delivery. While Rooney Mara delivers an oscar calibre performance that will be remembered as both a symbol of female empowerment and an individual going against the system in almost every way. Her frail physical structure covered in changing hair styles, bleached eyebrows, piercings, tattoos and black eye liner creates a distressing, alien look for Salander, adding to her lack of both normality and socially acceptable attributes more so than Noomi Rapace’s portrayal in the original. Her scene of physical torture upon her cantankerous handler is the focal point, showing a vengeance and lack of humanity reminiscent of Heath Ledger’s Joker. Her revenge-fuelled fantasies and feminine charms, highlighted at the end of film, deliver a very damaged yet human portrayal. Her physicality and experimentation with sexual desires defining her inner angst makes Mara’s performance an absolute stand out.

Fincher having his chance to adapt this bleak and brutal material has worked. Despite copying many scenes from the original, he has still created an impressive work of art that rivals his other films. With The Girl with the Dragon Tattoo, the blackened world of conspiracy and malice has seen his characters conform to their own set of rules through their frightening actions.